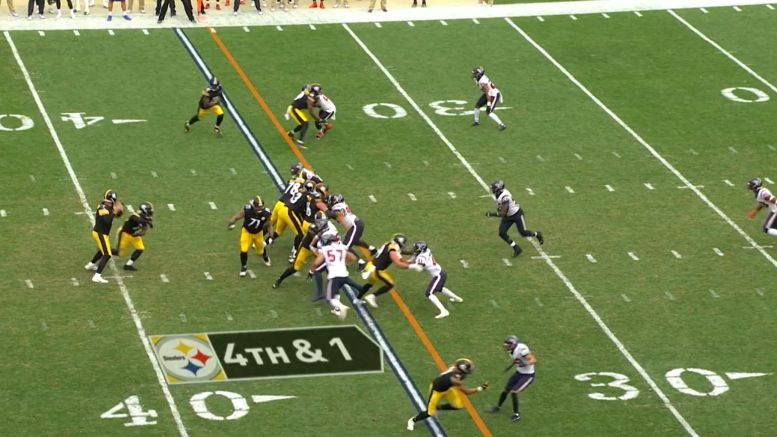 A week after going just 2-for-12 on third down, the Pittsburgh Steelers did a much better job earlier today in this area against the Houston Texans, finishing 8-for-18 overall, but doing a much better job as the game advanced. They also converted twice on fourth down in two attempts, plus a third time via penalty, so overall they went 11-for-18 in opportunities to extend the drive.

How did they do it? Well, for one thing, they had fewer third-and-longs as the game went on than they did a week ago, but they managed to convert a couple of those as well, including a touchdown to Eric Ebron.

Having more manageable third-down opportunities also opened the door for the run-pass option, which became increasingly valuable for Randy Fichtner, Ben Roethlisberger, Mike Tomlin, and the offense as the game wore on. “We did supplement the run with some quick RPO passing that allowed us to sustain drives and possess the ball”, Tomlin said after the game while addressing the running game, “so I’d be remiss if I didn’t mention that”.

“If they go ‘zero’, if they’re going open-field goal-line defense and things of that nature, you can’t run the ball into that”, he expanded later on in the game. “So we had some RPO options. We trust Ben, we trust our running game. We’re not going to allow people to cheat to that extent where they’ve got a goal-line defense in open grass. We’ll do what we’ve got to do to win the down”.

Arguably the most notable was on fourth and one with 3:11 to go. At that point, Houston still had two timeouts and the two-minute warning, down seven, the Steelers just outside of comfortable field goal range at the 35. Roethlisberger would connect with James Washington, showing strong hands, to move the chains.

Had they not made that play—and a couple of other third- and fourth-and-short RPO passes or RPO looks that set up success—the game could have gone in the opposite direction. While the Texans’ offense was sluggish through most of the second half, you don’t want to give them the ball on a turnover on downs with solid field position and plenty of time and resources.

This is why Tomlin always stresses the importance of possession downs. Think of just that one single play and how that was a pivot point for the game. Because they made it, they were able to drain the clock and Houston never touched the ball again.

If they didn’t, however, the defense would have to come up with yet another stop, because the Texans would have had three minutes and three shots to stop the clock. Putting yourself in manageable positions and giving yourself options to run or pass was a critical element of today’s game in the most crucial moments.