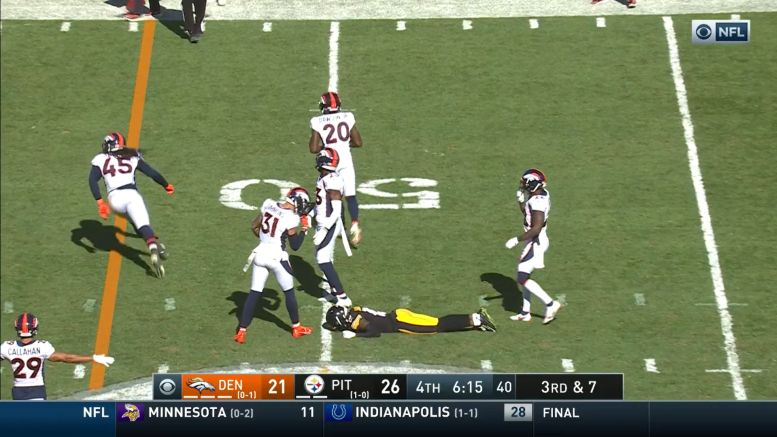 As an offense, the Pittsburgh Steelers were efficient in the season opener, going 8-for-15 on third down and then converting one of those failures on fourth down as well. They also got the ball into the end zone on three of their four trips inside of the 20-yard line.

They weren’t nearly as efficient in their home opener earlier today against the Denver Broncos, and it’s hard to pinpoint why, at least after simply watching the game live. They converted just two of their 12 opportunities on third down during the game, which is abysmal. They attempted to convert twice on fourth down as well, succeeding once.

“They performed well”, head coach Mike Tomlin said of a Denver Broncos defense that was without Von Miller and A.J. Bouye. “They mix things up. We have to perform better. We don’t make any excuses. It is what it is. It needs to be better than that. But I’d be remiss if I didn’t compliment those that we compete against when they perform well”.

Overall, the Steelers’ offense did play well. They put up over 400 yards, with Ben Roethlisberger throwing for over 300 and James Conner rushing for over 100. They averaged 6.6 yards per play, which is a healthy figure by any estimate.

But they turned the ball over twice, with one Roethlisberger interception and a late Benny Snell fumble. They couldn’t keep drives going on third downs when they got to that point. And that’s one of the main reasons that they only won by five points, 26-21, when at many points in the game it felt much different.

Of course, the defense had its issues as well. They allowed backup quarterback Jeff Driskell to throw for over 250 yards with two touchdown passes while only intercepting him once, and despite sacking him six times, they didn’t get him to fumble.

More concerning was the fact that they allowed the Broncos offense to convert via penalty six times in the game, which just seems unfathomable, but that’s another topic for another article. This one is about the inability of the offense to keep things going on third down.

We’ll look at this more deeply as the week goes on, but a lot of it did have to do with Roethlisberger, who frequently threw short of the sticks, though his players helped make some plays. James Conner was stopped on third and two at the goal line in the first half as well, and they chose to kick a field goal instead.

Still, while this was a less than ideal performance in this area, I continue to believe that what we saw in Week One in this area is much closer to what the norm will be this season than what we got today. This is a group that is still putting itself together and working kinks out with new faces, such as Eric Ebron, and Roethlisberger is only two games in after missing 14 last year. they’ll get better.