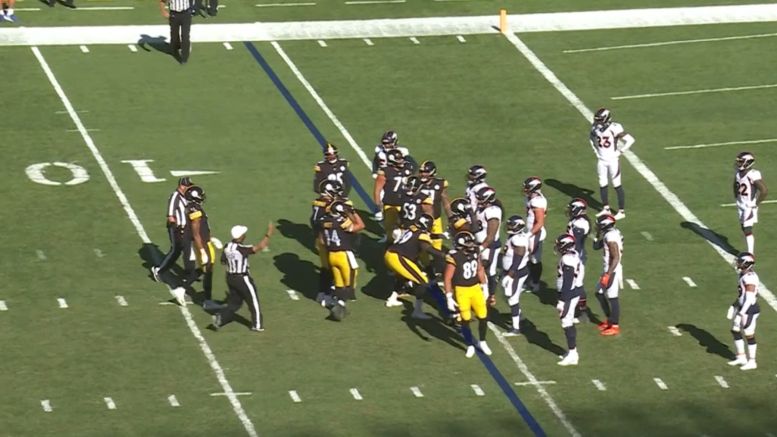 There are just some people who are readily and naturally able to ingratiate themselves to their audience, or to people in general. The Pittsburgh Steelers seem to have a couple of them along the offensive line, such as Zach Banner, and more recently, Kevin Dotson, the rookie fourth-round pick, who made his starting debut on Sunday at right guard.

Both linemen have that sort of dynamic about them that takes their work very seriously but also allows them to have a good time and enjoy life. Dotson played exactly one snap with Banner on opening night after Stefen Wisniewski was injured—only to watch Banner tear his ACL on said play.

While Dotson was not lined up next to his friend this past week in his first career start, however, he did find a way to pay homage in the most endearing way. At the end of the game, the Steelers entered Victory Formation to run out the clock, and as Banner did throughout the 2019 season in that formation, he simulated a serious protection stance on what is ordinarily a play in which players go through the motions.

When people started catching on to it last year, it turned Banner into a meme, with Alex Kozora creating a ‘highlight reel’ consisting entirely of Banner in the Victory Formation. When it came to light that Dotson had done this on Sunday, the rookie acknowledged that it was indeed an homage to Banner and that he had seen the highlights.

It definitely was 😂 I seen a highlight tape with nothing but banner kneel downs.

It’s a really nice gesture toward a player who really grew into the spotlight in Pittsburgh over the past 12 months or so, somehow managing to make the tackle-eligible position something that is exciting. He ultimately played more than 200 snaps as the extra lineman last season, but his goal was always to earn a starting job.

He managed to do that this past training camp, edging out Chukwuma Okorafor to start at right tackle, heading into his fourth season. He was representing himself well, though not without a hitch, in the opener during his first career start before going down with the knee injury and losing the season.

Will this be Dotson’s only Victory Formation, though, at least for this season? The Steelers generally keep their starting offensive linemen in for that, flanked by tight ends up front. Banner served as one of the tight ends in that formation.

It’s difficult to predict what the future holds, but it is entirely possible that both Banner and Dotson are in the starting lineup for the 2021 season opener. That sure would be a lot of personality for one starting front five. Both of represented themselves and their organization well during their time in Pittsburgh.