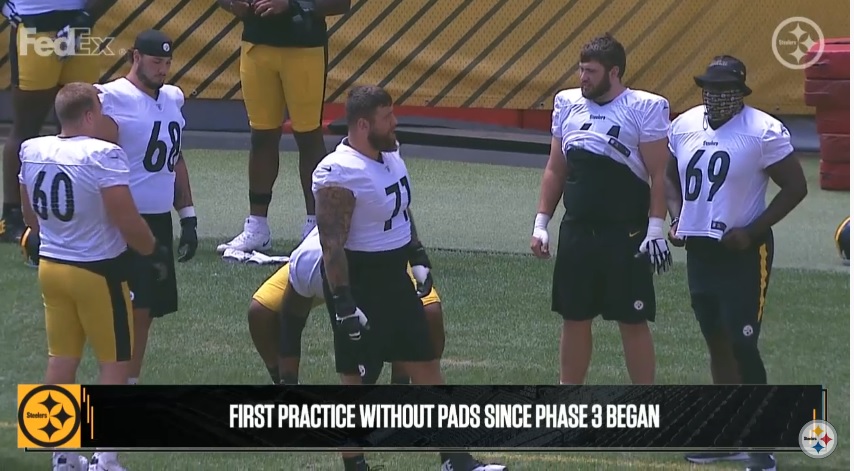 This offseason has probably been a tough one to date for Pittsburgh Steelers rookie guard Kevin Dotson as not only did the fourth-round selection out of Louisiana Lafayette not get the benefit of rookie minicamp, OTA and mandatory minicamp practices thanks to the coronavirus, he also suffered a knee injury during training camp that resulted in him missing valuable practice snaps. Fortunately for Dotson, however, he’s surrounded by a great group of veteran offensive linemen in the locker room.

“I mean, there’s a lot of guys in there who are been doing it a long time and you know, some guys who have been at different spots throughout their careers as well, I’d say it’s pretty much a group effort,” Dotson said on Monday when asked about the help he’s received from his fellow offensive linemen to date. “All of them have kind of taken me under their wing and anytime they see me messing up, they kind of correct it or help me.”

That’s not a bit surprising to see Dotson say and especially with Steelers offensive line room including several veteran players that have been together for several seasons now. One of those veteran offensive linemen is left tackle Alejandro Villanueva and it really seems like he’s taken Dotson under his wing this summer during training camp.

“I feel like [Alejandro] Villanueva’s probably one of the most vocal to me, because he feels like I’m in the situation he was when he first got here and he was on practice squad and stuff like that,” Dotson said.

Villanueva’s path to where he currently is as an NFL player was full of obstacles. He entered the NFL originally in 2014 as an undrafted free agent with the Philadelphia Eagles and as a defensive lineman at that. After he was released at the end of the 2014 preseason, the Steelers added Villanueva to their practice squad to develop as a tackle. in 2015 he made the Steelers 53-man roster and in Week 7 of that season he became the Steelers full-time starter at left tackle. He hasn’t missed a game since.

While we’ve yet to hear much from Dotson since he was drafted, the little he has had to say so far to the media has been impressive and he really comes off as a mature rookie and one with his head screwed on correctly. You can probably count on the veteran Steelers offensive linemen to make sure that’s the way Dotson’s head stays throughout his rookie season.

“I feel like they all help me,” Dotson said.