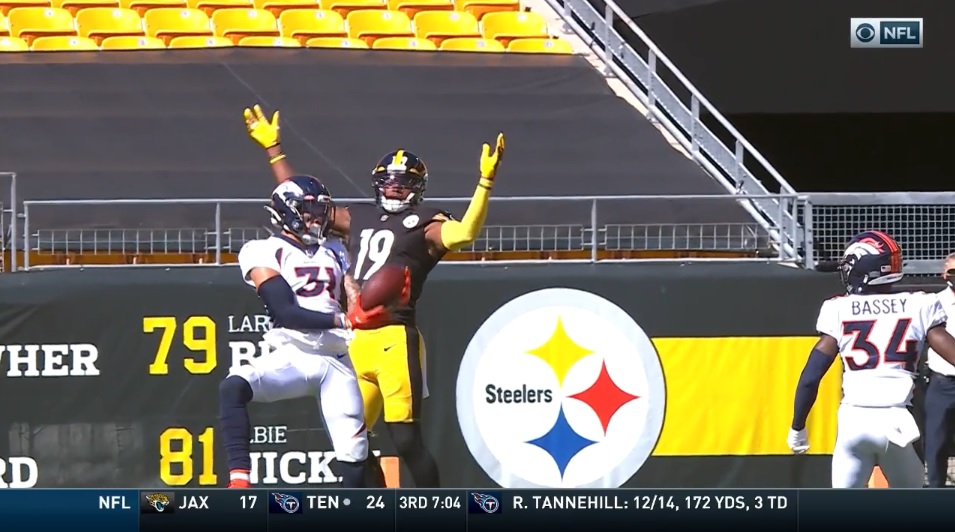 The Pittsburgh Steelers have their Hall of Fame quarterback back. A night and day difference from the Mason Rudolph/Duck Hodges experiment that plagued this offense last season. And while overall, Ben Roethlisberger has played well, he’s the first to admit he could be a whole lot better.

Roethlisberger outlined some of his mistakes in Sunday’s win over the Denver Broncos.

“I didn’t play well enough,” he said after the game via Zoom call. “I’ll have better answers when I can look at the film, but, um, I just got to trust myself and trust my guys. They’re in the spots they’re supposed to be. Um, sometimes you have to make an anticipatory throw and I didn’t do that well enough today. I didn’t connect with guys when they were open. I just didn’t play well enough.”

Roethlisberger’s lone interception, his first of the season, came on a lame duck throw intended for JuJu Smith-Schuster and easily picked by safety Justin Simmons. That gave Denver new life and got the Broncos back into the ball game the rest of the way. Roethlisberger said he should’ve trusted Diontae Johnson instead of making a forced, ugly throw to Smith-Schuster.

“I just need to trust myself making the throws. The guys are in the right spot. The interception never should have happened. Diontae ran a perfect route. I need to trust it and throw it. And he was there and he was open. So as I stepped up and tried to even make a throw up to JuJu to let him make a play. It wasn’t even a good throw, like one-on-one ball. I made JuJu have to adjust too much. A lot of the throws tonight that I missed are just me needing to trust myself and trust that the guys are in the right spots because they are in the right places. Hopefully it’ll come.”

Roethlisberger finished the game 29/41 for 311 yards, two touchdowns, and that interception. Far from a perfect performance, that was true of all aspects of the game, but there were enough “wow” plays to make up for those mistakes. A money throw deep down the left sideline to Chase Claypool, Roethlisberger throwing a dime in the face of pressure, and a classic roll-right, throw-left touchdown to Johnson.