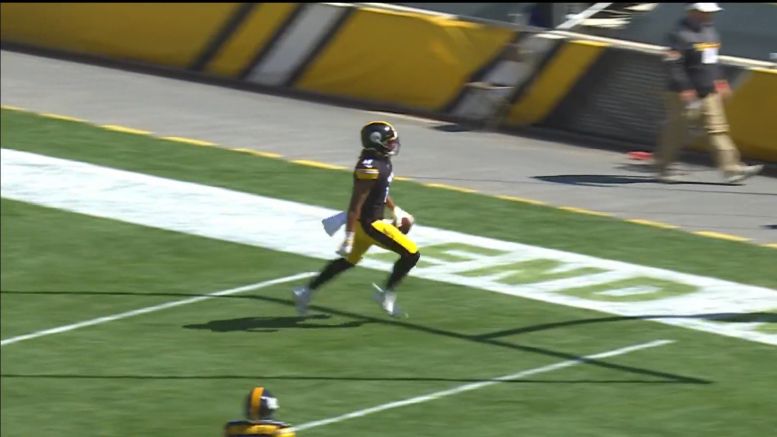 If you’re taken in the top 50 picks in the NFL Draft in this era, chances are good you’re not going to be sitting on the bench for long. Especially with the rookie wage scale structured as it now is, teams depends upon the cheap labor of players on their rookie contracts on order to flesh our their roster.

The Pittsburgh Steelers haven’t waited too long this year. They have already gotten meaningful contributions from three of their top four draft picks in 2020, with Kevin Dotson, a fourth-round offensive lineman, starting today. It’s been second-round wide receiver Chase Claypool making the biggest splash, however, including his first touchdown, an 84-yarder, on his fourth-ever NFL touch.

While he is getting worked into the lineup, now with six touches (including five-for-five on receptions) for over 100 yards over the course of the first two weeks of the season, he also feels that the coaching staff is handling him well and not putting too much on his plate too soon.

“I think the coaches are doing a really good job in easing me into the games”, he told reporters after today’s game. “They haven’t thrown me into the fire, and they’re not asking too much, but to make a play here and there is definitely something I can do. And then as the season progresses, I just plan on playing more and more and contributing to that even more”.

With no first-round pick this year, Claypool was their highest draft pick, and in fact their only pick inside the top 100, as third-rounder Alex Highsmith was selected with a compensatory selection that they got for losing Le’Veon Bell in free agency. Their natural third-round pick went toward the Devin Bush trade.

It’s not uncommon for rookie wide receivers to do well, of course, but this rookie was entering a wide receiver room that has already been productive, behind JuJu Smith-Schuster, James Washington, and Diontae Johnson. Through two games, however, they are all contributing, and all have gotten into the end zone, accounting for all five of Ben Roethlisberger’s touchdown passes.

Both Smith-Schuster and Johnson were significant contributors during their rookie seasons in 2017 and 2019, respectively, so this is not exactly unfamiliar territory for the Steelers or for Roethlisberger. Smith-Schuster caught 58 passes for 917 yards with seven touchdowns. Johnson caught 59 passes for 680 yards and five touchdowns.

So far, Claypool has five receptions through two games, but for 127 yards, averaging 25.4 yards per reception, with the one touchdown, of course. He has two explosive plays under his belt already and three of his five catches have gone for touchdowns. A fourth helped set up a field goal on third and long, though the fifth catch went for a loss on a blown-up screen.

But suffice it to say that if Claypool is already making a splash this early, the Steelers are going to continue to find ways for him to get involved. He’s not going to be idle, even if that means some others losing snaps. Talent finds a way onto the field.