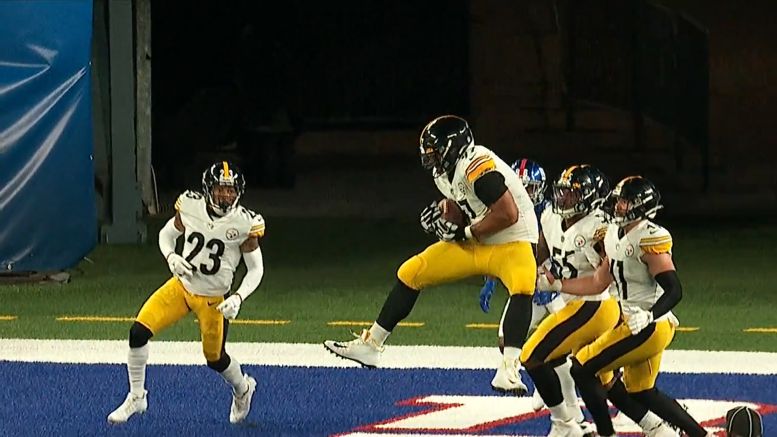 The Pittsburgh Steelers took the ball away a stunning 38 times last season. Unfortunately, after one game, they are currently only on pace for 32, after two members of their front seven were able to come down with an interception—two more than the secondary had.

The first one was nothing we haven’t seen before. T.J. Watt was able to pick off a Daniel Jones pass from close range by dropping into coverage unexpectedly, but that was his fourth interception of his career. The second pick of the game was a little more momentous. It was the first in the nine-year career of Cameron Heyward—the Steelers’ All-Pro defensive lineman.

As anybody who watched the game knows, it came at a critical moment, too, and was set up by relentless pressure from Bud Dupree, who had a great game in his 2020 debut despite being left off of the stat sheet in the sack column. The right outside linebacker hit Jones’ arm as he threw, leaving the ball fluttering in the air.

At the time, it was a 16-10 game, and the Giants were methodically marching down the field, beginning the drive on their own nine-yard line—and then the five, after Vince Williams tackled Saquon Barkley for a four-yard loss on first down.

But on the 19th play of the drive, New York had second and three from the Steelers’ four-yard line. They were ready to take back the lead when Dupree put pressure on Jones. Heyward read the play and was able to leap—in front of Robert Spillane—to secure the ball for the interception, joining Stephon Tuitt and Brett Keisel as fellow Steelers defensive linemen to have picked the ball off.

Securing the ball in the end zone for the touchback, the Steelers would go on to add another 10 points, making if 26-10 at the time, scoring 23 unanswered, to that was a big swing, and Heyward understood that.

“I just wanted to make a play for my team”, he said. “I saw Bud just laying him down, and I just tried to make a smart play and flow to the ball. I didn’t want him to be able to throw across his body. Sometimes you see that a lot in the red zone”. He added later, “in the red zone, I’ve got to be Revis and make those cornerback stops”, referring of course to Darrelle Revis.

It doesn’t hurt that he just got a nice new contract extension tying him to the team for the next five years and making him one of the highest-paid players at his position—setting him up to be the highest-grossing player in Steelers history behind Ben Roethlisberger in terms of career earnings.

Heyward has been known to jokingly join the punt return line during training camp as players attempt to catch as many balls as they can without letting any of them. I’m not sure how high he ever got, but he didn’t drop this one, and that’s all that matters.