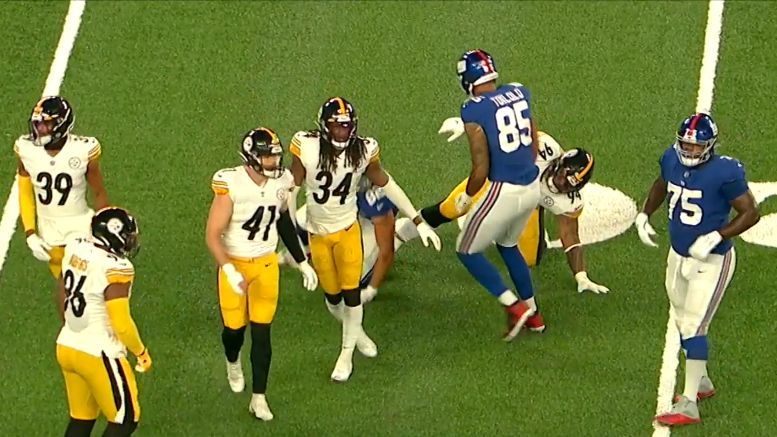 Explanation: Although he likely would have dressed had Mike Tomlin been fully up to speed on the new active list rules, Ulysees Gilbert III was a healthy scratch for the season opener on Monday. Robert Spillane (and Marcus Allen) dressed ahead of him, with Spillane actually seeing defensive playing time.

It has to be acknowledged that we did not watch training camp, and there is no preseason, so we have a very minimal amount of information about what the Steelers ‘looked like’ heading into the 2020 regular season opener.

We did hear Keith Butler and Jerry Olsavsky say positive things about both Gilbert and Spillane, but Spillane was the one who was given the opportunity to play, seeing eight snaps on defense and 18 on special teams, registering one tackle.

Even though Gilbert likely would have been active were it not for Tomlin’s error, the fact that he chose to dress only one of the two and opted for Spillane tells you what you need to know. And the fact that they were comfortable putting him on the field tells you even more.

The most likely reason that the Steelers dressed Spillane over Gilbert without realizing that they could dress both is because Spillane was a tackling machine on special teams in his eight games last season and has become a core special teamer. While Gilbert played well in that department, too, Spillane was looking like the next Tyler Matakevich.

And while it’s nice that he played, it’s telling that he only played on one drive—the 19-play drive by the Giants in the third quarter. And he only came on because Vince Williams was getting winded, first coming off after chasing Darius Slayton on a crossing route.

And Allen dressed because he is depth at multiple positions. Gilbert will dress on Sunday, however, and will dress for every other game as well, provided that he’s healthy. And when they need to spell a linebacker, he’ll be the one asked first. That they are comfortable with both playing, however, is good news.