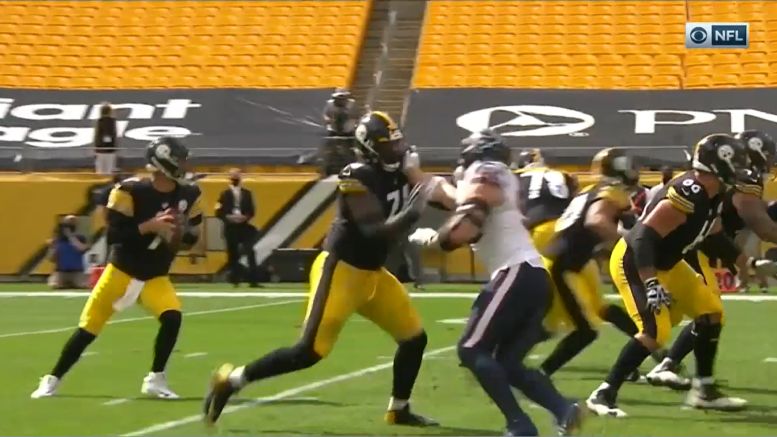 The Pittsburgh Steelers decided in training camp that Zach Banner would be their first best option to start at right tackle this season with Matt Feiler moving to guard in the wake of Ramon Foster’s retirement. But they did so knowing that it was a close decision, so when Banner suffered a torn ACL in the opener, they were comfortable turning to Chukwuma Okorafor.

A third-year player drafted in the third round out of Western Michigan, Okorafor already had two starts under his belt during his first two seasons. He has started two more games so far this season, and has generally been regarded as successful, particularly for Sunday’s game going up against J.J. Watt. Even the man he’s protecting has noticed.

“I’ve always believed in Chuks”, Ben Roethlisberger told reporters earlier today. “I knew coming into the season that it was a really good battle between him and Banner. In my opinion, you couldn’t go wrong. I think both of them are great players that put a lot of work in. We’ve seen Chuks in the past play, whether it’s being an extra tight end reporting or playing tackle. We, and I specifically, have a lot of confidence in him”.

So far, Pro Football Focus has credited Okorafor with allowing only three hurries on 85 snaps in pass protection, although they haven’t been impressed with the run-blocking play of either of the Steelers’ tackles, including Alejandro Villanueva. Nevertheless, they have the 10th-most rushing yards in the league and are averaging 4.7 yards per carry.

With the salary cap likely coming down next year and several linemen—Feiler, Villanueva, and Banner—set to be unrestricted free agents in 2021, it would be a major victory if the Steelers could discover in 2020 that Okorafor, who is under contract for next season, is a starting-caliber offensive lineman.

That is, after all, why they drafted him, even if he has had a bit of a setback the past two years with Banner’s rise in stature. First the latter superseded him for the swing tackle and tackle-eligible role last year being Feiler, and then won the starting job this Summer.

But now he has 15 games, two of which are already in the books, to audition for a full-time starting job, one that may even see him flip over to the left side next year depending upon whether or not they are able to keep Villanueva under contract beyond this season.

As happens with so many young linemen, the more Okorafor plays, the more comfortable he is likely to feel in his role and the better he will perform. We’ve seen that happen over and over in the past, most notably, in my opinion, with Kelvin Beachum at left tackle, but also Villanueva as well. That he is already playing as well as he is currently is good news about how well he might be playing by the end of the year.