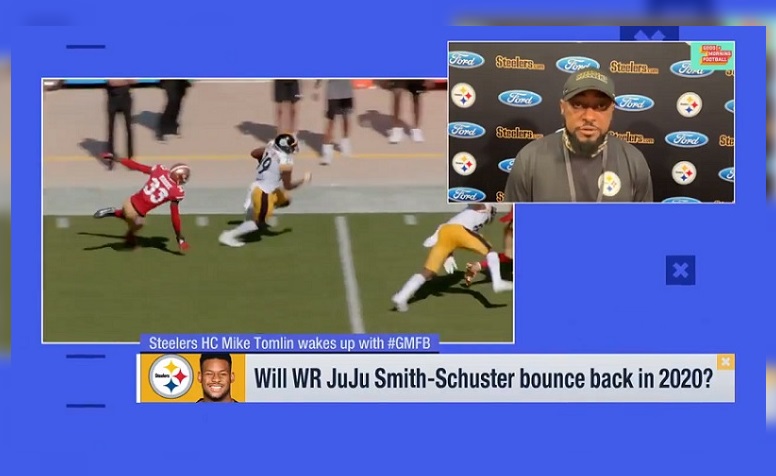 Pittsburgh Steelers wide receiver JuJu Smith-Schuster had a disastrous 2019 season that included the former second-round selection out of USC missing four full games due to injuries. He also had a key fumble in overtime in the team’s Week 5 loss to the Baltimore Ravens that ultimately resulted in a loss that I’m sure he’d like to forget. Now fully healthy once again, Smith-Schuster is looking to bounce back in 2020 and hopefully have a season similar to, or better than, the one he had in 2018, On Thursday, Steelers head coach Mike Tomlin was asked about Smith-Schuster and what a bounce back season might look for the wide receiver during his appearance on ‘Good Morning Football’ on the NFL Network.

“You know, I know that JuJu’s ready to answer those questions, and it’s not only who’s playing quarterback and overall how he functions within an overall group, but it’s also his general readiness and health,” Tomlin said of Smith-Schuster. “And he had some health issues a year ago. He’s worked extremely hard to show up to camp in the best physical condition that he could be in and in the best physical health that he could be in. And so, we start from there.”

Smith-Schuster’s offseason was well documented by him on his social media accounts staring not long after the 2019 season had ended. He really trained hard along with running back James Conner and physically looks better than he ever has. That’s a good thing for him as 2020 is a contract year for Smith-Schuster as he’s scheduled to become an unrestricted free agent in March.

In 2018, Smith-Schuster opened a lot of eyes as he registered 111 receptions for 1,426 yards and 7 touchdowns on his way to being voted the team MVP and to the Pro Bowl as well. That 2018 season, however, included him playing opposite superstar wide receiver Antonio Brown. Many wondered and debated if Smith-Schuster would be able to maintain the 2019 production he had in 2019 after the Steelers sent Brown packing during the offseason.

In his first two NFL seasons, Smith-Schuster registered 29 plays of 20 yards or longer with two of those being touchdown receptions that were each 97-yards. Quarterback Ben Roethlisberger was the quarterback on 26 of those 29 plays and with him returning from injury in 2020, hopefully the two can resume their big play connections once again. At least that’s what Tomlin is banking on happening.

“I’m excited about walking this journey with him and I’m expecting big plays from him and quality performances like he’s delivered for us since we drafted him out of SC several years ago,” Tomlin said of Smith-Schuster.