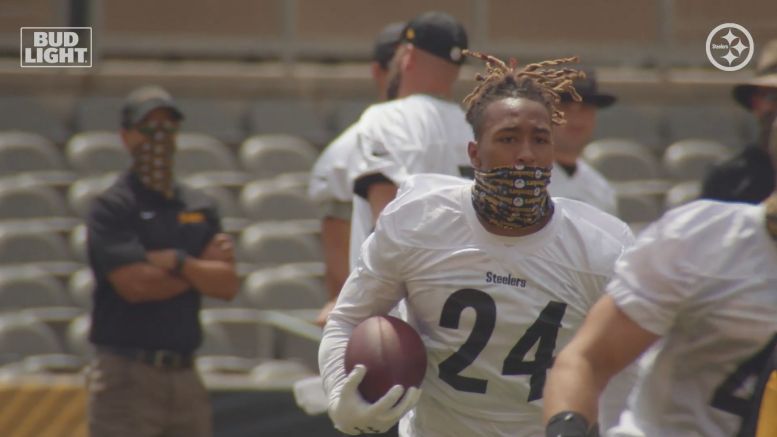 While Pittsburgh Steelers running back Benny Snell Jr. has only been with the organization one full season, it didn’t take him long to find out how important it is to have quarterback Ben Roethlisberger running the offense. On Wednesday, Snell, who failed to log a single offensive snap during his rookie season with Roethlisberger under center, was asked to comment on what means for the team’s overall offense in 2020, and specifically the running game, to have the veteran quarterback back from his injury.

“It’s gonna pick up tremendously,” Snell said. “Ben’s able to change the pace of the game, able to make the calls at the line much quicker. It makes us all one when we’re out there. So, it’s huge that he’s back.”

The thing that Snell said about Roethlisberger that probably sticks out the most is the quarterback’s ability to make the calls at the line much quicker. Last season, the Steelers were forced to start two inexperienced quarterbacks in Mason Rudolph and Devlin Hodges after Roethlisberger was lost for the season to injury in Week 2 and neither of them impressed overall and especially not pre snap.

Snell also noting that Roethlisberger’s ability to change the pace of a game upon his return was also an interesting comment from the second year running back and it’s unfortunate that he wasn’t asked to further detail that observation in a follow-up question.

While it seems like it happened a long time ago, Snell talked very openly not long after he was drafted last year about what it meant to him to have a chance to play in an offense with Roethlisberger at quarterback.

“Like, I don’t want to be like a fanboy or be too excited around him because I’ve been watching Big Ben ever since I was a baby,” Snell said in May of 2019. “And it’s crazy that I’m going to actually be getting handoffs from him. I don’t want to lose myself now that this is a business and fortunately, I’m getting paid for what I do. Everything is going to be serious, everything is going to be love, but anytime we’re outside of practice, I’m going to let him know how much I admire him, how much of a fan I was so I can be a sponge and I can learn from everything he says. But when I step in between those two lines, it’s all serious. So, that’s the time and place for this and that.”

As mentioned, Snell has yet to realize of his dream of playing an offensive snap with Roethlisberger under center and thus getting a handoff from the quarterback. That, however, figures to change right out of the chute once the 2020 season gets underway.

While Snell will likely open the 2020 regular season as the backup feature running back behind starter James Conner, odds are good he’ll see at least a few offensive snaps per game throughout his sophomore season. He’s got to be looking forward to that first snap and first handoff now that he’s been able to see Roethlisberger back practicing again in training camp.

“It’s exciting to see him out there back 100 percent ready to go,” Snell said on Wednesday.