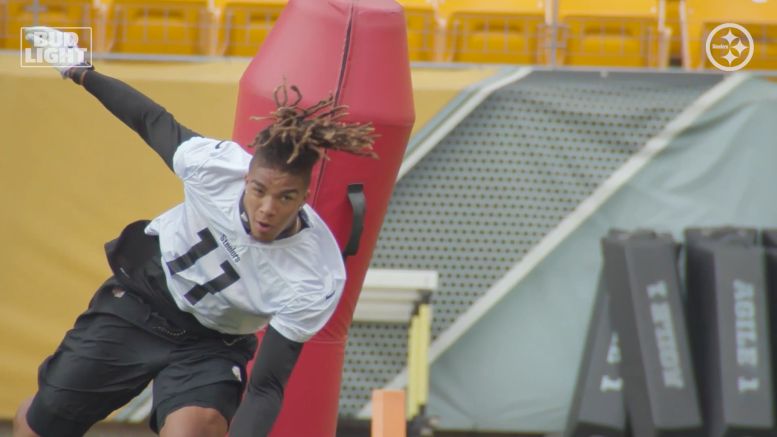 When you really step back and evaluate the Pittsburgh Steelers’ situation, they are more fortunate than most—especially if you judge it by the input that they need to see from their new additions over the course of the 2020 offseason, a year in which business has been conducted in anything but the usual manner.

More or less, the fate of the 2020 season rests in the hands of those who were already here in 2019. Anything added by new additions would be a bonus, window dressing. Not that that should be discarded, particularly as it concerns the skill positions.

The most notable addition, of course, came in free agency with the signing of tight end Eric Ebron, who has the potential to go for 700-plus yards and 10-plus touchdowns. He will factor in, but the Steelers did already have Vance McDonald, who if healthy, is also capable of producing at a high level.

In terms of draft picks, their two early skill position players figure to have the best chance of making an impact, and that is where Pro Football Focus believes the Steelers need to see their 2020 NFL Draft class come through for them this year—as they write, to “provide some juice offensively in complementary roles”.

And they would indeed be complementary pieces. Second-round pick Chase Claypool comes into a wide receiver room that already includes JuJu Smith-Schuster, Diontae Johnson, and James Washington. Fourth-rounder Anthony McFarland was added to a running back platoon headed by James Conner and filled out with Benny Snell, Jaylen Samuels, and Kerrith Whyte—plus the recently-added Wendell Smallwood.

“The Steelers can utilize his size, speed and explosiveness as a mismatch weapon on vertical routes and in the red zone”, the article reads concerning Claypool, who at 6’4” and 234 pounds is comfortably the largest presence that the team boasts at the wide receiver position.

“McFarland, meanwhile, brings some burst and pure speed that was previously lacking in the Steelers’ backfield”, he piece reads on. “When healthy, James Conner has been productive — making defenders miss tackles at one of the highest rates in the league. He doesn’t have McFarland’s breakaway speed, though. Benny Snell Jr. doesn’t, either. As is the case with Claypool, all the Steelers need to see from McFarland as a rookie is production in the limited role they ask him to fill — a change-of-pace back who can rip off the occasional big play”.

A big-bodied threat at wide receiver and game-breaking speed in the backfield, two presences that the Steelers have lacked on offense. While these are not necessary for the team’s success or failure in 2020, Claypool and McFarland can be positive and effective contributors to the Steelers’ cause this year if utilized judiciously.