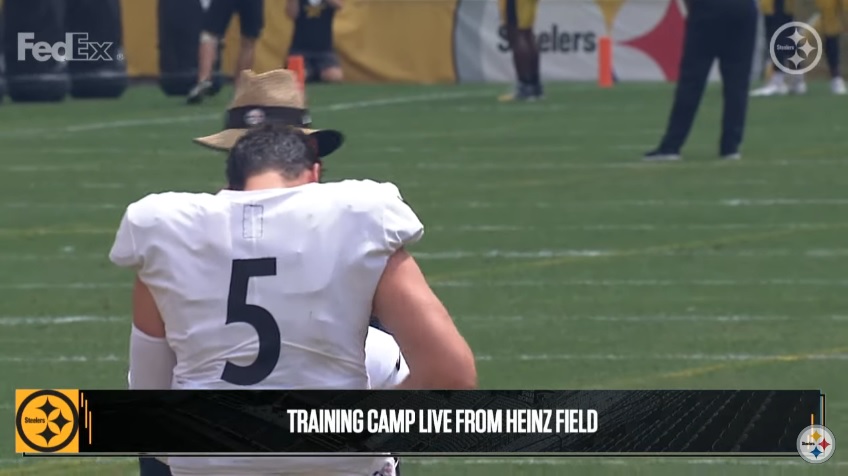 It’s just one practice, a small window into how things may be going, but for Paxton Lynch’s sake, let’s hope his training camp is going better than what happened at yesterday’s practice. According to media who attended, Lynch struggled to the visible dismay of OC Randy Fichtner and HC Mike Tomlin.

Per Steelers.com’s Bob Labriola, Lynch had a turbulent day.

“Paxton Lynch didn’t really have the best of days when it comes to his accuracy. He overthrew McCloud by about 20 yards without a single defender around him, which did not please Randy Fichtner or Tomlin. Later, Lynch didn’t even look at a streaking Ryan Switzer down the seam during 11-on-11.”

He wasn’t the only one to offer a negative assessment. The AP’s Will Graves sub-tweeted the ugly day Lynch was having.

Given how tight-lipped the media has been when it comes to training camp info and especially anything negative (most camp reports this time of year are glowing), these notes on Lynch must be especially damning. Context is important, it’s just one practice, we can’t offer our own evaluation, but this isn’t what you want to hear.

Lynch is in a contested battle with Devlin Hodges for the #3 gig. Hopefully a position that never has to enter the game in 2020 but we saw what happened a year ago.

A practice environment should be where Lynch thrives. Physically, he has all the tools. That’s what got him drafted in the 1st round by the Denver Broncos. Everything else is the reason why John Elway gave up on him so quickly and why he’s struggled to find his NFL footing. Lynch reportedly looked good in practice last season, wowing teammates with his arm. But accuracy and consistency have been his pitfalls and if yesterday’s nugget of info is any indication, that hasn’t changed.

If Hodges is impressing the way he did in camp last year, he may run away with the #3 job. Though in the middle of a pandemic and expanded 16 man practice squad, it’s possible – likely, arguably – the team carries a 4th quarterback on the taxi squad in case of injury or illness.