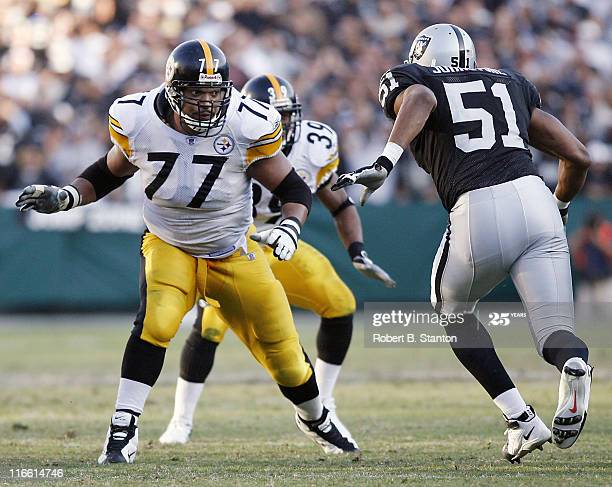 Dave and I recently brought up Smith’s name on a recent episode of The Terrible Podcast in a conversation around Alejandro Villanueva. Before him, the last franchise left tackle the team had was Smith, an underratedly talented linemen whose career was cut short by back injuries.

It’s also easy to forget he was the second ever draft pick of Kevin Colbert after taking WR Plaxico Burress 8th overall in the 2000 draft. Smith, hailing from Arizona State, was taken 38th overall. He started the first three games of the season at right tackle opposite Wayne Gandy and wound up starting nine games in total his rookie year, missing time with a knee injury.

The injury bug was a sign of things to come. When available, Smith was an excellent tackle, a massive body at 6’5, 321. He made it through his sophomore and junior seasons without issue, starting all 16 games both years, but his luck wouldn’t hold by 2003. The year started well enough. He inked a six-year, $26 million extension for the Steelers, a price worth paying for flipping him over to left tackle. But they didn’t end well. Smith played just six games that season

By then, he shifted to the blindside but only played six games that season. Pittsburgh finished an ugly 6-10 with QB Tommy Maddox sacked 41 times. That was the year Alan Faneca kicked out to LT as a patchwork fix to a desperate offensive line.

Smith bounced back the following season, starting every single game, and twelve more during the team’s 2005 Super Bowl run, including Super Bowl 40’s win over the Seahawks.

As he turned 30 and neared the end of his 2003 extension, his back gave out. After undergoing back surgery in December of 2007, he started five games in 2008, placed on IR late December in a move that most recognized as the end of his Steelers’ career. Here’s what the Post-Gazette wrote on the move.

“Smith left the Oct. 5 game in Jacksonville in the fourth quarter for what was then described as cramps. It turned out to be another lower back issue that coach Mike Tomlin said did not pertain to his lower back surgery last December. He has not played nor practiced since.

Smith, 30, is in the last year of his contract and would become an unrestricted free agent. The Steelers drafted him in the second round from Arizona State in 2000, and he made the Pro Bowl in the 2004 season. He ranks 13th among all potential free agents, according to scout.com. Max Starks has started the past 10 games for Smith.”

He became a free agent after the season and the team didn’t re-sign him.

The 49ers signed him to a $10,5 million contract during free agency. His tenure didn’t last long. In late August right before Week 1, Smith announced his retirement. His and the team’s hope his back injury would subside long enough to squeeze at least one more season out of him didn’t come true.

Per the East Bay Times:

“It was considered a low-risk gamble by both sides. The 49ers, recently burned by a big contract to the oft-injured tackle Jonas Jennings, offered Smith a deal built mostly around incentives. They wanted to protect themselves in case Smith’s season was cut short by injury.

Smith, an Oakland native, was willing to take less money because he was eager to play in the Bay Area. Instead, the back injuries proved too much to overcome.”

He was inducted into the Arizona State Hall of Fame in 2011.

Marvel Smith, your blast from the past.