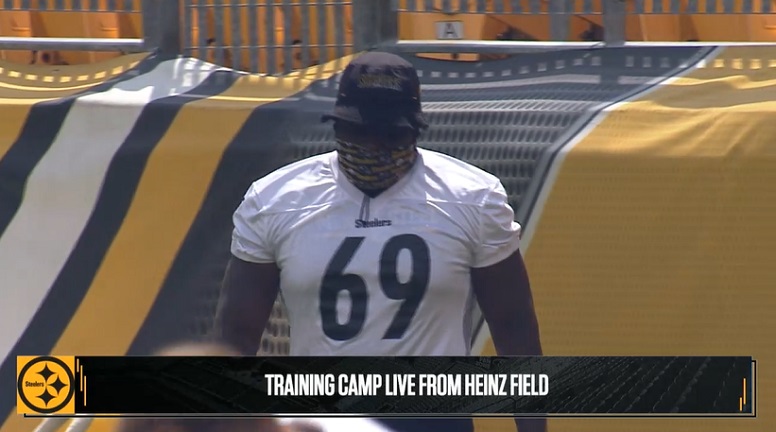 Rookie guard Kevin Dotson showed remarkable durability in college. He started a career 52 games at Louisiana-Lafayette and that can make anyone feel invincible in a sport riddled with so many injuries. But Dotson suffered an injury scare early in training camp, a knee injury that seemed serious at the time, requiring assistance from trainers and Ben Roethlisberger to get off the field.

While we don’t know the specifics of the injury, we know Dotson has fully returned to practice. Speaking with reporters earlier today, Dotson says the injury opened his eyes.

“I feel like for me, it was a kind of a wake up call that it could be over quick,” he said via the team website. “So I had to make my impact faster. I need to do what I can right now. Cause I never know what could happen in the future.”

Luckily for Dotson, his rookie season still has a future. And Dotson has logged extra work when he’s been healthy thanks to the injuries suffered by David DeCastro and Maurkice Pouncey’s excused absence, opening the door for Dotson to see more reps than normal. He’s one of hundreds of rookies around the league trying to catch a moving train and prepare for the regular season after the entire spring was wiped out due to COVID.

Once the season starts, Dotson is likely to be back in sweats. Not because of injury but he figures to be a gameday inactive as the 8th offensive linemen. Had there been a regular offseason, Dotson may have gotten a look at the left guard job, offensive line coach Shaun Sarrett even hinted as much, but there’s been too much time lost for him to get serious consideration there.

Despite his college starting experience, all his work came at right guard. A position locked down by David DeCastro though he remains out with a lower body injury. If DeCastro is unavailable, or if any of the linemen go down, the door will crack open ever so slightly for Dotson to dress and be one snap away from seeing his first regular season action.