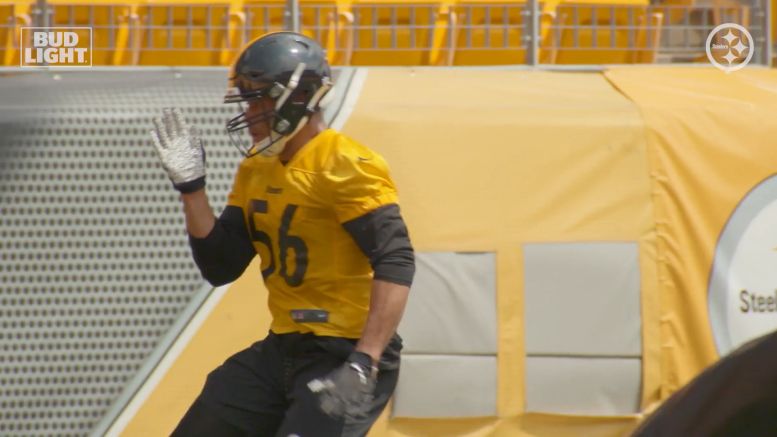 He wasn’t a first-round pick. He wasn’t a major prospect. He didn’t go to a Power 5 school. But he was a riser on the draft boards by the time the Pittsburgh Steelers selected Alex Highsmith late in the third round of the 2020 NFL Draft, coming out of Charlotte, a small school where he dominated his senior year as a pass-rusher.

And now, he appears to be a fast-rising player in training camp. Just a day after head coach Mike Tomlin said of him that the young man is proving that he belongs, he defensive coordinator, Keith Butler, is striking the same chord.

“Alex has really shown that he belongs in the NFL”, he told reporters earlier today about the rookie. “He belongs where we drafted. Do we really know that until we get into live action? Probably not. But what we have seen him do here in practice is encouraging in terms of us putting him in and having enough confidence in him that when he goes in it won’t be a huge drop off from those two other guys”.

Earlier this offseason, the Steelers released Anthony Chickillo, who had been their primary backup outside linebacker for the past couple of seasons, largely to create salary cap space. That move left an opening for the role behind T.J. Watt and Bud Dupree, and it seems as though Highsmith is getting legitimate consideration for it.

“Those two other guys are probably elite in the National Football League. It’s going to take a little while for Alex to catch up with them, but I think he’s got a real good attitude, what we are asking him to do”, Butler said of the rookie coming in and playing behind his starting edge defenders.

“You don’t have to tell him something two or three times. He usually gets it after the first time”, the defensive coordinator continued about his newest linebacker. “I have always thought good defensive football players learn from their mistakes. They don’t repeat them. I think Alex is that type of guy. Hopefully as the year goes along, he will get better. We won’t worry about resting those guys”.

The Steelers do have three other outside linebackers with them in camp, each an undrafted free agent picked up over the past three offseasons. Most notable is Olasunkanmi Adeniyi, out of Toledo in 2018, who did receive some playing time last year, albeit a small sum. He has been with the team for the past two years.

Behind him is Tuzar Skipper, a former Toledo teammate. Though he was on the initial 53-man roster a year ago, he was quickly waived, and only found his way back to the team late in the year. Joe Lockhart is an undrafted rookie this year, but we’ve heard little about him.