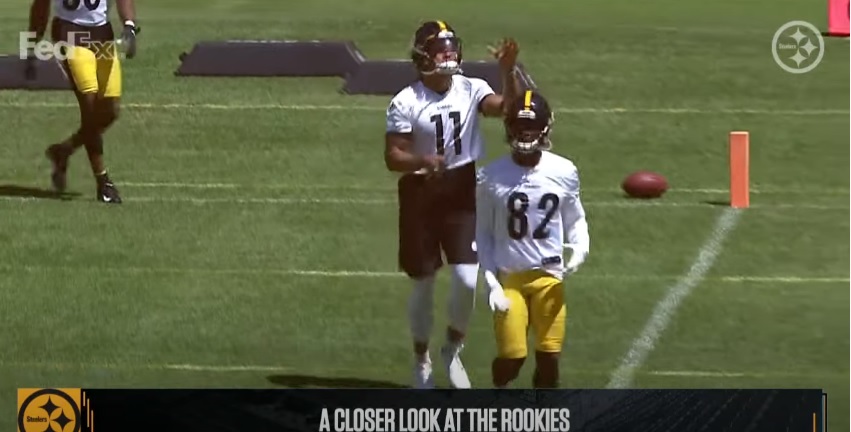 “One man’s misfortune is another man’s fortune.”

That’s one of his go-to phrases when describing injuries, right up there with “next man up.” A slew of injuries and days off at wide receiver is creating the chance for some young wideouts to try and emerge. Diontae Johnson missed another practice with a calf injury today and JuJu Smith-Schuster was given his second straight day off. Ryan Switzer was unable to finish today’s practice with a foot injury, leaving the team with only six able-bodied receivers. Tomlin’s focus was on those guys, not the ones who missed or left early.

“I was able to see more from [Chase Claypool],” he said after practice. “I was also able to see more from Ray-Ray McCloud and others…Darboh got a lot of time today with the first group. That’s what I tend to focus on when people miss time. Not necessarily the time missed but the opportunity that others get to ascend within the group and show their capabilities.”

The Steelers finished today with six receivers in uniform: James Washington, Chase Claypool, Deon Cain, Ray-Ray McCloud, Amara Darboh, and Anthony Johnson. Plenty of snaps to go around for a lot of young and new faces. Of those six, four are brand new to Pittsburgh while Cain is only in his second year, Washington his third.

The two WR spots most vacant without Smith-Schuster, Johnson, or Switzer are the X and slot spots. It sounds like Darboh was working at the X spot quite a bit while McCloud was likely seeing a good number of snaps in the slot.

Darboh comes to the Steelers with pedigree. A 3rd round pick out of Michigan by the Seahawks in 2017, he caught just eight passes as a rookie and cut by Seattle before the 2018 season. Though a journeymen ever since, he’s a big body at 6’2, 214 who caught 14 touchdowns for the Wolverines over his college career.

McCloud comes by way of Clemson. Drafted by the Buffalo Bills in 2018, he spent last season with Carolina before ball security issues got him released. He’s kick and punt return capable, a valuable trait, which gives him decent odds of landing on the new 16 man practice squad.

Of course, Tuesday was another chance to look at Claypool and Cain, a pair of athletic, big-bodied receivers. Johnson also has a big frame though his odds of making the 53 are dim.

Tomlin has repeatedly described this as a “lean-in” week. A chance for guys to make a move and cement their role or spot on the roster. The chance for more playing time couldn’t have come at a better moment for these young receivers fighting to hang around the team into the fall.