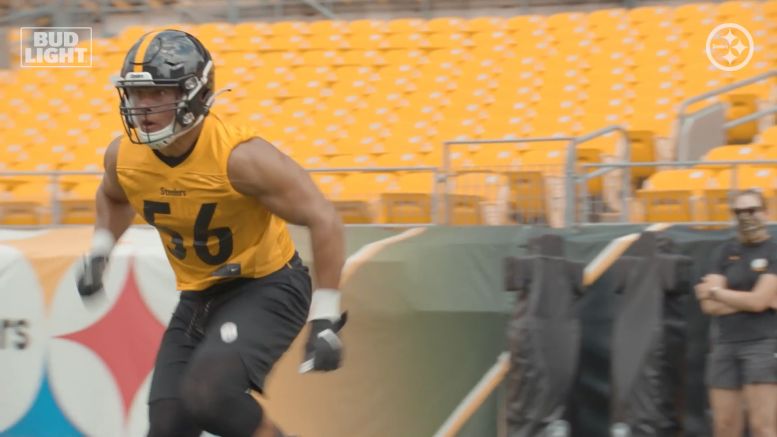 Truth be told, I wasn’t expecting to see much of Alex Highsmith this season as a rookie. At least not outside of special teams for the Pittsburgh Steelers. But the more that I hear players and coaches talk about the third-round draft pick, the more it sounds as though he is going to have a legitimate chance to be the first pass-rusher off the bench when T.J. Watt and Bud Dupree come to the sideline.

The latter spoke of his young teammate earlier today before practice, saying that he is seemingly ahead of schedule. “Alex is doing real good. He’s a smart kid, very athletic. He moves well”, Dupree told reporters. “He’s always eager to learn stuff, so he’s always asking questions and trying to imitate some stuff that we do just to make sure that he’s doing it correctly. He’s always running to the ball well. He’s actually making plays on the field, too”.

It’s all the more impressive given how few opportunities he had to get work in during the offseason, even taking into consideration non-sanctioned work. “It’s good to see just how he came in prepared. Even during the pandemic”, Dupree noted. “He didn’t even have OTAs or anything like that and he still came in and he’s doing pretty good”.

With the Steelers letting go of Anthony Chickillo earlier this year, the role of the top backup edge defender is up for grabs, and that can mean a couple hundred snaps on the year. Even though the starters aren’t looking to rush off the field, both understand that, especially with a decreased emphasis on coverage, it’s in the best interests of the team that they keep themselves right from a physical standpoint.

The ‘other guys’ currently consist of second-year outside linebacker Tuzar Skipper, who spent some time on the 53-man roster last season but did not contribute, and Jayrone Elliott, recently re-signed after bouncing on and off the roster whenever they had a transaction they needed to make.

It’s too early to say who will make the team, because other than Highsmith, everybody on the roster has been on the team as recently as last season, so the Steelers obviously view all of them as capable in some form or fashion. In terms of who might be first off the bench, however, Highsmith may have a better chance of being that contributor than many thought.