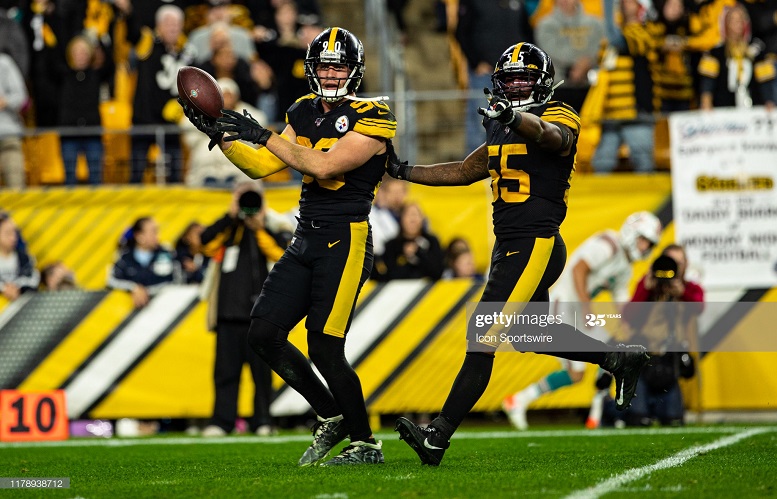 Just how much better can the Pittsburgh Steelers defense be in 2020 than they were in 2019? If the bulk of unit and key players stay healthy, the 2020 Steelers defense might wind up being the best unit the team has had on that side of the football since 2008.

Two of the defense’s returning players from last season, Steelers inside linebacker Devin Bush, a rookie in 2019, and safety Minkah Fitzpatrick, who was acquired in 2019 via a Week 3 trade, should both be able to play even faster and more confident in 2020 than they did in 2019. On Wednesday, Steelers outside linebacker T.J. Watt, a legitimate 2019 NFL Defensive Player of the Year candidate, was a Wednesday guest on 93.7 The Fan and during his interview he was asked about Bush and Fitzpatrick and specifically, how much more does he expect out of those two players in 2020 now that they’ll have more of a fully formed grasp of the defense.

Watt started his response off talking about Bush, who led the Steelers defense in tackles in 2019 as a rookie.

“Yeah, I think for Devin, it’s huge just to have a full offseason under his belt without all the rookie meetings and all the combine prep and everything like that,” Watt said of the second-year Bush. “He knows what he’s expecting going into camp. He knows the playbook; he knows the speed of the game. So, I’m excited just to get more communication out of him and to step up in a leadership role.”

Watt then preceded to give his thoughts on Fitzpatrick, who registered five interceptions and a forced fumble last season with the Steelers on his way to earning Pro Bowl and First-Team honors for the first time in his young NFL career.

“And obviously Minkah, I think we all kind of look past the fact that he did not know the playbook when he first got there in Week 2 or 3, whenever it was, Watt said of Fitzpatrick. “And to be able to step in and play as well as he did, I’m just super excited because now he knows the whole playbook. He knows everybody, he knows the communication and it’s going to be exciting year, man. I’m really excited.”

Watt was asked more about the effect Fitzpatrick had on the defense last season after his arrival via a trade and if his positional flexibility and thus ability to line up all over in the defense allowed for the Steelers 2019 leading sack-getter to open up his motor more than normal and take more chances than he maybe normally would.

“I don’t know, man, my motor is always open and always running,” Watt said. “I definitely think that stuff like that makes the quarterback hold on to the ball for just a quarter-second longer. And as a pass rusher, that’s all you need is you need a guy roaming around in the middle just trying to play with the quarterback’s head. You can see a lot of pre snap reads with the quarterback, trying to find where Minkah is, predict where Minkah’s going. And if he’s watching Minkah for just a half a second more, instead of watching his receivers to try to get the ball out, or look at his checkdown, that’s going to be going to be a great recipe for success for the whole front guys rushing the passer.”

Quite honestly, Fitzpatrick really didn’t move around all that much in his first season with the Steelers and that’s what possibly led to opposing quarterbacks making a concerted effort to stay away from him quite noticeably during the final third of the 2019 season. Additionally, while Fitzpatrick was indeed great last season, the rest of the Steelers secondary, that included cornerbacks Joe Haden, Steve Nelson, Mike Hilton, and fellow safety Terrell Edmunds, weren’t too shabby individually or collectively, either. Every one of those secondary members will be back in 2020 along with Watt and his outside linebacker counterpart, Bud Dupree, in addition to Bush and defensive linemen Cameron Heyward and Stephon Tuitt.

Bush and Fitzpatrick being even more comfortable in the defense than they both were last season is certainly very exciting to think about and that’s one of the several primary reasons why the Steelers 2020 defense might end up being the best unit we’ve seen in Pittsburgh since 2008.