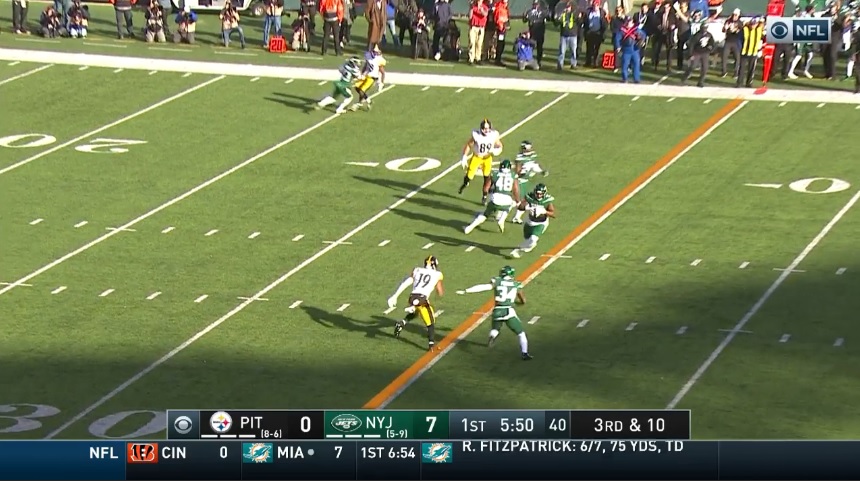 Drive Overview: Ugly first down run. Terrible blocking across the board and James Conner doesn’t have a chance. Weakside linebacker isn’t even accounted for. Steelers were -1, six blockers against a seven man box. Conner tackled for a loss of one.

Better on second down, Matt Feiler paving the way for Conner to run ahead for six. 3rd and 5. Diontae Johnson sits down against zone coverage and Hodges hits him for a nine yard gain then again to McDonald on a five yard out on the ensuing first down.

On 2nd and 5, Conner’s able to bounce to the corner and win the edge for a pickup of 15. Steelers putting something together. Steelers pack it in with 13 personnel on 1st and 10, the WILL LB isn’t accounted for, and he runs free to tackle Benny Snell for a one yard loss. Defense allowed to pack the box wins again.

2nd and 11 run nets just one for Conner, setting up 3rd and 10. Steelers can’t handle the Double A gap look with SS Jamal Adams blitzing behind, forcing Hodges into a hurried throw that’s picked off by the underneath linebacker.

Blame: End of the year is when the Steelers’ protection schemes got exposed. Of course, it’s more likely to happen when you put yourself in 3rd and long and the Steelers’ run scheme didn’t have enough answers on this drive. Outleveraged and outmatched.

Drive Overview: Failed power run on first down. Looks like a whiff by David DeCastro, missing OLB Jalyen Ferguson, who tackles Snell after just a one-yard gain. But Snell may have been better off to run off DeCastro’s outside hip with Ferguson stepping down. DeCastro looks like he wants to log the block and Snell isn’t on the same track.

Harry concept (slant/flat) on 2nd down. Pressure unblocked off the edge creates a rushed throw and it’s incomplete on the slant to Johnson.

3rd and 9. Ravens, as the Bills and Jets did, bring safety pressure and it gets home. Hodges makes a pretty good sideline throw, JuJu Smith-Schuster diving for it, but can’t hold on and the Steelers have to punt it away.

Blame: Again, pass pro issues on 3rd down. And Snell I think made a mistake by making a bad read on that first down run.

So that concludes our series. I will wrap this one up this upcoming week with my final thoughts and trends that led the offense to be so miserable on their first drive.