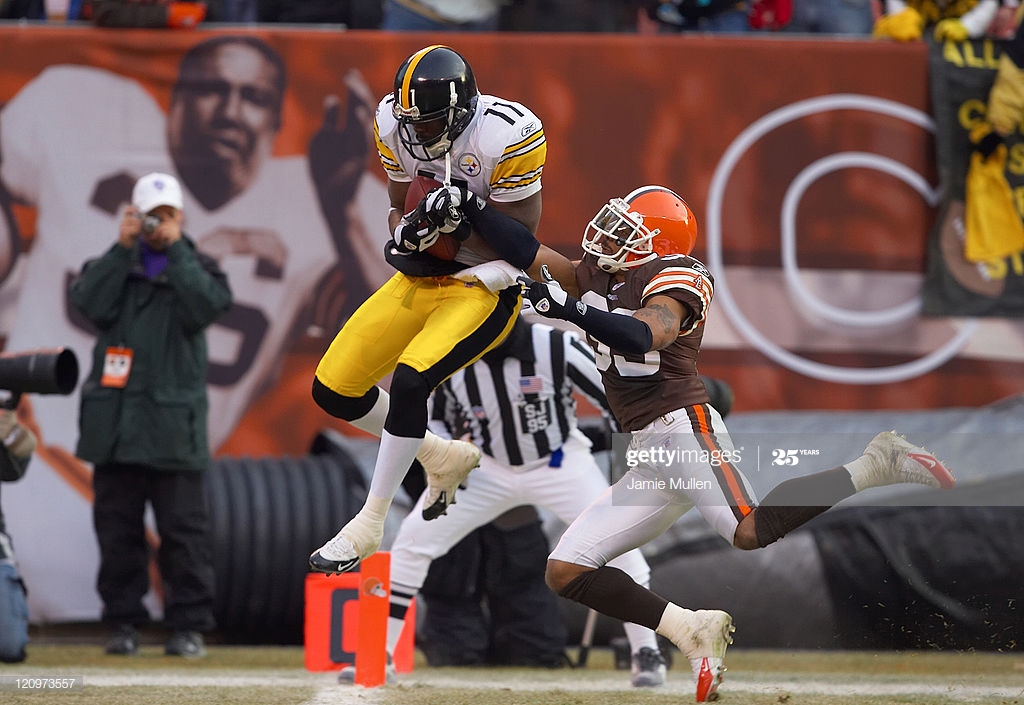 What surprised me most revisiting Morgan’s career was the most basic of facts. He was only a Steeler for one season. Ok, one-and-a-half, technically, lasting until final cutdowns in 2006, but in my memory, he was with Pittsburgh for a couple seasons. Not the case.

A 2nd round pick of the Browns in 2001, he had his moments in Cleveland, including averaging an NFL high 17.2 YPC in ’02, but he wore out his welcome pretty quickly, gaining a dubious reputation for drops. The Browns traded him to Dallas in 2004, a WR swap that sent Antonio Bryant to Cleveland. Morgan spent the rest of the season in Big D, catching 22 passes, before being cut right before the 2005 season began.

Pittsburgh signed him the next day. He was with former OC Bruce Arians, who drafted and coached him in Cleveland. But Morgan was buried on the depth chart behind Hines Ward, Antwaan Randle El, and Cedrick Wilson, not to mention being part of a run-heavy offense and second-year quarterback.

In 2005, Morgan caught just nine passes. To his credit, he made them count, averaging nearly 17 yards per catch and two touchdowns. He took advantage of mop-up duty, like when the Steelers blew out his former team, a 41-0 butt kicking capped off by Morgan’s 31 yard touchdown. Nice leaping grab from Charlie Batch in the end zone.

Morgan also served as the team’s starting kick returner, averaging a healthy 25 yards per return, including a 74 yard runback to begin OT in Week 6 against Jacksonville.

That should’ve set the Steelers up for a win. But Willie Parker fumbled on first down, a 2nd down run went nowhere, and Tommy Maddox botched the handoff on third down…let’s get back to talking about Quincy Morgan.

Unfortunately, and this was another fact I completely forgot about, Morgan broke his leg in the Wild Card win over Cincinnati (the Von Oelhoffen/Palmer hit). The injury ended his season, unable to be part of the roster that became the first 6th seed to win a Super Bowl.

He still got his ring and carried through the 2006 training camp before being released at final cutdowns. Morgan signed with the Denver Broncos two weeks later. He played in 11 games, solely as a kick returner, averaging 24.9 yards per try, before getting released the following season as the team whittled down their 53 man roster.

That was his NFL career. Morgan spent seven years in the league, catching 164 passes for 17 touchdowns and a career kick return average of exactly 25 yards.

An 2012 feature on Morgan noted he lived in Houston where he ran a small trucking company. He reflected on his difficult time in Cleveland, comparing it to Pittsburgh where he saw a much friendly fan base.

“When I went to Pittsburgh, I was welcomed with open arms,” he said. “In Pittsburgh, they love the players. They have the players’ backs night and day. Through thick and thin, those fans show up. It’s like football heaven.”

Morgan went on to say Cowboys fans are even worse than the Dawg Pound so Pittsburgh seems to be on top of the food chain.

Quincy Morgan, your blast from the past.