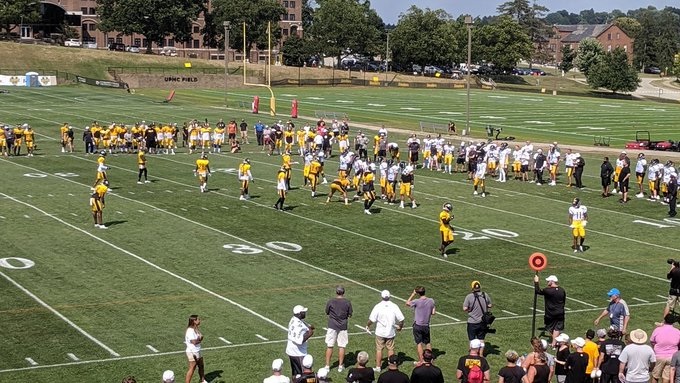 Things sure feel quite different this season but as is tradition, here’s my pre-training camp Pittsburgh Steelers’ 53 man roster prediction. Not many changes from our first edition, the expanded practice squad is the only notable alteration, and it’ll be hard to update this list without any preseason games. But we’ll see where the summer takes us. For now, my predictions.

Analysis: No changes here from before. Lynch vs Hodges is the only battle. In a practice setting, Lynch will look better, though with expanded practice squads, the risk of COVID, and the youth in this group, I think the team could end up keeping four on the team. You’ll see that below.

Analysis: If I was GM, I’d keep Kerrith Whyte Jr. but Samuels gets the nod for at least on paper, being a bit more versatile. Uncommon for this team to keep four running backs but they repeated investments in the position make it much likelier this season.

Analysis: Watt will be the team’s fullback, replacing Roosevelt Nix.

Analysis: No debate about the top four. Questions for spots five and six, if they even keep six. Feeling more confident about Switzer’s odds of making it. Veterans have a clear leg up in a year without an offseason program, preseason, and a very different-looking training camp. He’s versatile enough, important if someone gets hurt/sick, and he’ll have Roethlisberger’s trust. Don’t overlook that. Strong odds he’ll be on the roster Week 1. Cain is the #6 as a height/weight/speed threat that appeals to the Steelers’ vertical offense.

Analysis: Not much to discuss here. Hard to see anyone pushing Gentry for the #3 spot unless the team goes outside the organization, which seems unlikely right now. Have to hope this group stays healthy or there will be problems.

Analysis: Giving Okorafor the slight edge in the RT battle to start the year but it’s still a toss-up. Unfortunately, we won’t have much of an opportunity to see this one play out. The team will be working off limited information, too. Such is life, Tomlin would say.

Analysis: Feiler still the favorite to start at left guard. If he kicks back out to RT, Wisniewski should step into the lineup. Will an extra/emergency center like JC Hassenauer make it? Perhaps but someone like him could float as the 54th/55th player on the roster throughout each week as opposed to making the initial 53.

Analysis: Not much changing with my 2.0 roster prediction. Defensive line feels about as settle as any position. Only question is if Isaiah Buggs can get a hat on gameday.

Analysis: Tyson Alualu should open the year as the Steelers’ starting nose tackle. Daniel McCullers will be the backup, proving even in 2020, some things never change.

Analysis: One minor alteration to the roster. Tuzar Skipper now part of the squad after being left off before. Don’t know if he’ll be active on gameday but they know just enough about him to hold onto him and promote healthy competition with the three young bucks behind Watt and Dupree.

Analysis: Hard to debate this one. Unless there’s injury/illness, these will be your four ILBs on the roster.

Analysis: Deleting Trajan Bandy. Too tough for a UDFA corner to turn heads with limited chances to do so. Can be shuffled to the practice squad to begin the season.

Analysis: Marcus Allen the hard luck loser here. Kinnel will have to prove himself too but has played free safety and his XFL experience should help. With Dangerfield and Brooks Jr. making the roster, Allen just felt redundant.

Analysis: Boz’s spot not in doubt this summer.

Analysis: Will the Steelers even have two punters in camp? Either way, Berry’s job is safe.

Analysis: Perhaps the most jacked long snapper in the game.

Analysis: 16 spots to work with here. Fewer restrictions for the practice squad lends itself to more veterans making these rosters but the Steelers simply don’t have a lot of candidates. Keeping four QBs is smart for injury/illness protection, good to have those guys in the building involved in the gameplan if someone needs to be promoted at the last moment while Whyte is someone the team could protect throughout the season and call-up if James Conner went down and they needed a runner (or kick returner). Edmunds is there for ST purposes. Blacknall would’ve been a top sleeper in a normal offseason while Radar and Raymond have interesting, differing skillsets. O-line depth will be critical and yes, I’m leaving Derwin Gray off the list.

Coatney and Davis provide interior depth and guys to keep around to maybe get McCullers off the roster by next year, Hendrix is probably going to play OLB but could also play as a three-tech in sub-packages. Lewis gives them some ILB depth, Bandy is a worthy redshirt, and Battle is a special teamer and depth at safety.