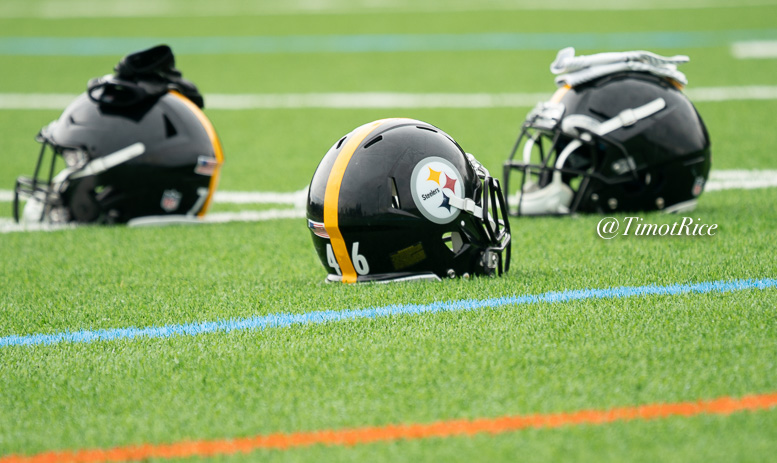 One of our immediate post-draft traditions is to map out a way-too-early Pittsburgh Steelers’ 2020 roster prediction. Our next best guess will come right before training camp but here’s a way to view the roster with the group mostly settled post-draft.

My first crack at the 53 man roster (which can expand to 55 by shuffling practice squaders on and off) with the new 12 man taxi squad below.

Analysis: Lynch and Devlin Hodges will battle it out in camp for the #3 job. But Kevin Colbert has spoken highly of Lynch and he has a “wow” arm, even if his career bombed out in Denver. Rudolph will be the backup but he better have an outstanding preseason.

Analysis: Kerrith Whyte Jr. the odd man out, too similar – but probably worse and without the draft pick – than the rookie McFarland. Samuels has more versatility and gets the nod. Going with four running backs is heavy but warranted given the consistent investment in the position and commitment to improving the run game.

Analysis: First four are locks. Gets murky from there. Nearly left Cain off, Claypool represents the same “big guy” ability, but had the last spot open for him. Everyone’s favorite Switzer remains here. Plenty of fair criticism his way but he’s a slot option behind JuJu where there aren’t other viable backup options, he can still in theory work in the return game, and hey, Roethlisberger loves him. Ben gets sway over the final couple roster spots.

Analysis: Cut and dry here after the team didn’t add a tight end in the draft. Not even a UDFA. Gentry could be pushed out by a veteran at cutdowns but for now, he’s in the driver’s seat.

Analysis: They’ll both make the roster but the battle between Okorafor and Banner will be one of the top camp fights. Either have the chance of winning it. Villanueva is locked in on Roethlisberger’s blindside.

Analysis: Feiler lumped in with the guards because if the season began today, he’s likely your starting left guard. Wisniewski the backup interior linemen with Dotson developing for a year and learning left guard. He could take over in 2021.

Analysis: Bit of a jumbled mess for backups but they’re all on track to make the roster. Will one of Wormley, Buggs, or Alualu end up playing nose tackle? Who knows. They all should make the roster for us to find out.

Analysis: The one true nose tackle in the middle. McCullers may or may not earn the starting job but he should make the team as a backup.

Analysis: Adeniyi beats out Tuzar Skipper. Steelers haven’t shown they like him enough on special teams to get him to stick. Of course, he’ll have the summer to change their mind.

Analysis: Excited to see Gilbert III in his sophomore year after his rookie season was cut short by a back injury. Spillane was a special teams machine for the half-a-year he played in 2019. Really like his chances of being back on the roster.

Analysis: Top five are locks. Door open for #6. I’ll stick my neck out for the UDFA Bandy, a feisty nickel corner who left school a year early.

Analysis: Safety depth is a free-for-all. Marcus Allen has struggled to find his place in two years and I don’t know if that’s going to change. Kinnel played some FS in college and on paper, could backup Fitzpatrick, while Dangerfield is an accomplished special teamer. Brooks Jr. hopes to follow a similar route.

Analysis: No worries about Boz heading into this camp.

Analysis: Berry had a horrendous last month to 2019 but was equally excellent the first three. Steelers didn’t bring in serious competition to push him, although they could look on the street if he struggles in August.

Analysis: Canaday will handle the snapping duties in 2020.

Analysis: Nice to have a couple extra spots this year. Going heavy at running back but Edmunds is essentially a special teamer. Blacknall is an interesting combination of size and big-play ability. Radar has stuck out, Hassenauer has “center only” potential if they need to call someone up while Jones is an interesting tackle project worth keeping around with several OTs pending free agents.

Coatney is one of the more interesting UDFAs while Davis is the lone draft pick not to make the roster. Skipper gets stashed like the team tried to do a year ago, Lewis is another UDFA who makes it, and Myres could perform well on special teams.