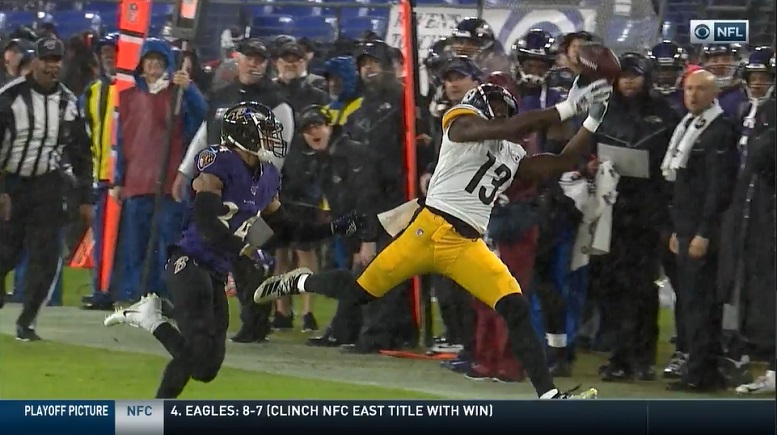 Despite all that transpired throughout the 2019 NFL season, Pittsburgh Steelers wide receiver James Washington showed quite a bit of improvement in his second year in the league as the former second-round draft pick out of Oklahoma State caught 44 passes for 735 yards and three touchdowns. That said, Washington’s stats probably should have and could have been even better in 2019 had the quarterback play been better, and especially when it came to his deep pass targets.

Most deep-ball incompletions that were deemed the QB's fault in 2019:

On Wednesday, Pro Football Focus identified the top three players that registered the most deep-ball incompletions in 2019 that were deemed the fault of the quarterback and Washington was listed tied for second with 12 in total.

The NFL identifies a pass that flies more than 15 yards in the air past the line of scrimmage as a deep pass. Even so, Pro Football Focus sometimes designates a deep pass as being one that travels 20 or more yards in the air. For whatever it’s worth, in their Wednesday tweet PFF did not identify the criteria for a deep pass in their rankings. Even so, we have some other deep pass related stats that can be focused on.

For starters, Washington was targeted 32 times in total on deep passes of more than 16 yards in 2019 and he caught just 12 (37.5%) of those targets for 431 yards and two touchdowns. By the way, both of those deep touchdown pass receptions came from quarterback Devlin Hodges.

Of the 27 players that registered 30 or more deep pass targets in 2019, Washington tied with Jacksonville Jaguars wide receiver Chris Conley for the third-lowest catch rate (37.5%) in the NFL.

While PFF did not identify which Steelers quarterbacks were responsible for the at fault 12 deep incompleted passes to Washington, none of the three that attempted the 32 total targets were great overall with their accuracy. Hodges, however, did have the highest deep pass completion percentage (46.2%) when targeting Washington last season while Roethlisberger had the worst (25.0%). Mason Rudolph was right in the middle with a 33.3% completion rate on 15 total deep pass throws to Washington, of which one of those was a drop by the wide receiver.

Washington was a much better deep pass catcher in college and that included Rudolph being on the throwing end of most of those targets. In his two NFL seasons so far, however, Washington has a very underwhelming deep pass catch rate of 31.1% as he’s caught just 14 of 45 total targets for 510 yards and two touchdowns.

The Steelers figure to have a healthy Roethlisberger back in 2020 and his return to the field after playing just six quarters in 2019 should help Washington immensely. The same goes for the Steelers overall deep passing game.

While the Steelers did draft another deep pass catching wide receiver this year in Chase Claypool, Washington figures to start the 2020 season ahead of the rookie on the depth chart. If Washington and Roethlisberger can connect at roughly a 50 percent clip on deep passes during the first half of the season, the former should continue to see a bulk of playing time. If, however, Washington and Roethlisberger can’t connect deep consistently enough in the first half of the regular season, Claypool might very well wind up picking up extra playing time in place of the former.

Regardless of what al transpires in 2020 with the Steelers and their deep passing game, Washington can’t be back and on the top of this PFF list a year from now.