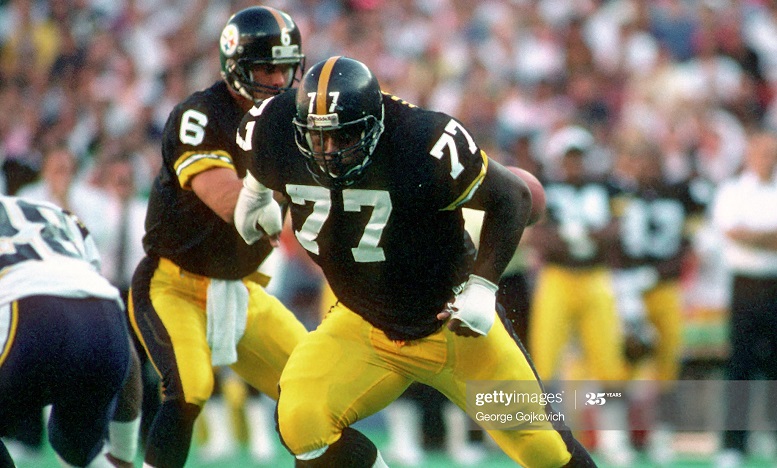 Carlton Haselrig, a Johnstown, PA native and former Pittsburgh Steelers All-Pro guard, died Wednesday at the age of 54, according to the Cambria County coroner. He reportedly collapsed at his Johnstown home at 8:15 a.m. Wednesday and was pronounced dead at 9:19 a.m., Cambria County Coroner Jeffrey Lees said.

Haselrig, who was selected in the 12th round of the 1989 NFL Draft out of the University of Pittsburgh at Johnstown despite never playing football at the collegiate level, spent his 1989 rookie season on the Steelers developmental squad and primarily as a nose tackle. In 1990, Haselrig impressed enough at guard during training camp that he wound up making the roster that season as a backup.

In 1991, Haselrig became the Steelers starting right guard and in 1992 he was named a First-Team All-Pro and voted to the Pro Bowl. In total, Haselrig played in 57 games for the Steelers from 1990-1994 and he started 36 of them. Haselrig went on to play one season with the New York Jets in 1995 after his time in Pittsburgh came to an end after the 1994 season.

Haselrig was the most decorated athlete in Pitt-Johnstown history, according to the school. He won six heavyweight NCAA National Wrestling championships — three at the Division I level and three at the Division II level — and holds five Pitt-Johnstown all-time wrestling records, as well as an overall career record of 143-2-1, a .979 winning percentage.

In college, Haselrig reportedly never lost a match in the Division I National Tournament (15-0 record and three titles), and he never lost or tied a Division II opponent. Also, during his time at Pitt-Johnstown, Haselrig wrestled his way to an NCAA record of 122 consecutive matches without suffering a loss. In 2005, he was named to the NCAA 75th Anniversary Wrestling Team.

After his NFL career was over with, Haselrig ultimately became a professional MMA fighter and he made his debut on April 19, 2008 and won that fight. He retired as an MMA fighter in 2009 with a 3-2 record.

In recent years, Haselrig reportedly served as an assistant coach of the wrestling and football teams at Greater Johnstown High School.