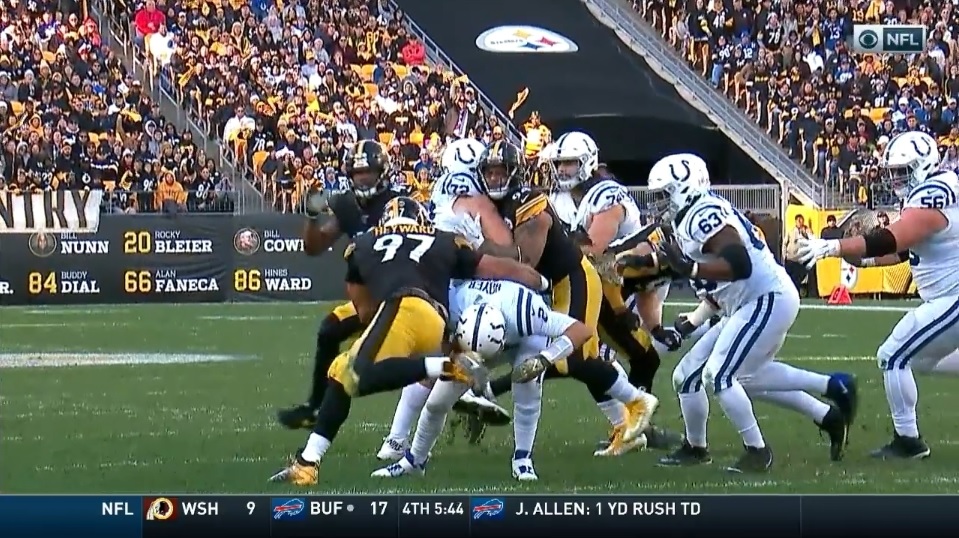 ESPN has been publishing an Insider series recently in which they seek to rank the top 10 players at each position, using the input of members of NFL offices and coaching staffs. While the Indianapolis Colts’ Quenton Nelson naturally made the list, Jeremy Fowler quoted one coach as saying that his performance against the Pittsburgh Steelers’ Cameron Heyward last season prevents him from seeing Nelson in the same light.

“Ever since I saw Cam Heyward whoop up on him”, the quote goes, “I’ve never looked at him the same”. While us mere Steelers bloggers were quick to point out that Heyward did have an excellent game against Nelson, it wasn’t to suggest that Nelson was bad, or even overrated. Just that Heyward is really good. And he is.

And he wasn’t having that quote knocking Nelson, either.

“Man I’m not with that”, he said in response to the quote that Fowler Tweeted. “So because I had a good game it devalues a great talent. Dude is heck of a talent. How about I’m a great player myself and we won the game simple as that. I know Q is a dog and I know it’s a 5 star match up when we line up”.

Man I’m not with that. So because I had a good game it devalues a great talent. Dude is heck of a talent. How about I’m a great player myself and we won the game simple as that. I know Q is a dog and I know it’s a 5 star match up when we line up.

Nelson is not the first great lineman that Heyward has made look bad on at least a handful of reps in a game. There is a reason that he has been to the Pro Bowl for three straight years, after all, including two times named a first-team All-Pro.

Of course it serves his own interests to maintain that an opponent that he dominated is also a dominant player himself, because it makes him look that much better to have beaten a great player. But what he said was also true.

After all, he does practice against a great interior offensive line in practice all the time, a group that includes a couple of first-team All-Pros in their own respect, so it’s not like it’s new to him to have to go up against top talent. He’s been doing it for the bulk of his career.

The Steelers and Colts get to face each other again this season, as they seem to do most years, as both finished second in their respective divisions a year ago. That game is scheduled to take place very late in the season, all the way in Week 16, at home, just a couple of days after Christmas. By that point, assuming the season takes place normally, we should already have a great feel for what kind of season both players have been having.