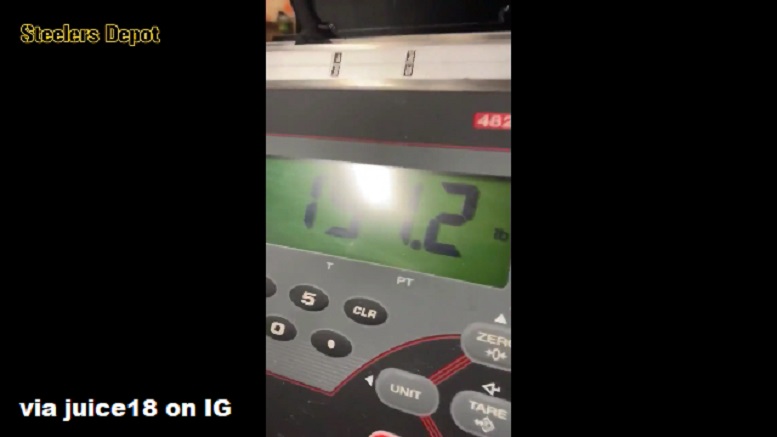 The Pittsburgh Steelers reportedly wanted wide receiver Diontae Johnson to put a little more meat on his bones this offseason and the second-year player out of Toledo has done just that.

According to a Tuesday morning Instagram video from Johnson, he weighed in at 191.2 pounds at the team’s facility recently, which was likely Tuesday morning. Johnson is currently listed on the Steelers official website at 183 pounds, which is what he reportedly weighed in at when at the 2019 NFL Scouting Combine.

Former Steelers wide receiver Antonio Brown also was asked to gain some weight during his years with the team.

From IG, Diontae Johnson weighs in now at 191.2 pounds. He is listed at 183 pounds on the Steelers official website. #Steelers pic.twitter.com/SOHuVaFg2y

A little extra added weight shouldn’t be harmful for Johnson as it will allow him to be a bit more physical when it comes to absorbing contact from defensive backs. The added weight shouldn’t effect his elusiveness or speed as well. A year ago, the Steelers wanted wide receiver James Washington to drop a little weight and he did just that.

Johnson has posted quite a few workout videos on his social media accounts this offseason and he looks great. The Steelers first of two third-round selections in the 2019 NFL Draft had a very nice rookie season that resulted in him catching 59 passes for 680 yards and 5 touchdowns. His 59 receptions was a high for all rookie wide receivers in 2019 as well. Most of those catches also came via the Steelers backup quarterbacks with starter Ben Roethlisberger being sidelined all but six quarters of the 2019 season with an elbow injury.

Johnson stated several weeks ago that his goal in 2020 is to have 1,000 or more yards receiving in addition to making the Pro Bowl and being named an All-Pro punt returner again.

“The ultimate goal is to win a championship,” Johnson said, according to Teresa Varley steelers.com. “My goal is to have at least 1,000 yards and the Pro Bowl. I also want to be an All-Pro punt returner.”