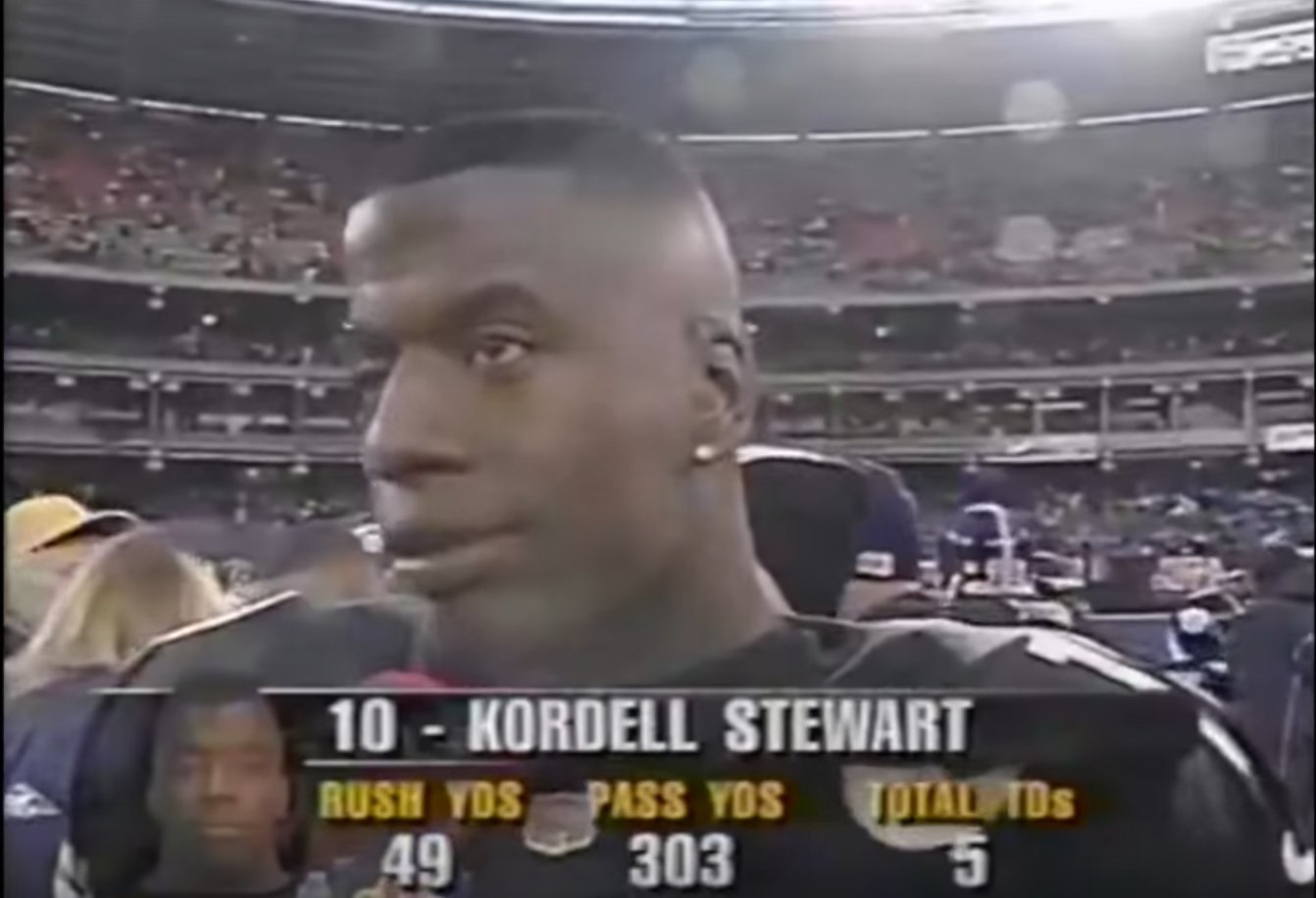 If there was ever a real coming-out party for Kordell Stewart as a quarterback, it occurred at Three Rivers Stadium on Dec. 7, 1997 against the eventual Super Bowl champion Denver Broncos.

In that AFC powerhouse matchup in early December, Stewart outperformed future Hall of Famer John Elway, throwing for 303 yards and two touchdowns, adding 49 rushing yards and two scores, leading the Steelers to a thrilling 35-24 win over the Broncos late in the season on the way to an 11-5 finish and an AFC Central Division championship.

Against the Broncos that day in ’97, Stewart and the Steelers started slowly as Pittsburgh fell behind Elway and the Broncos, 21-7, thanks to two hookups from Elway to Rod Smith and a 3-yard Terrell Davis touchdown.

Trailing, Chan Gailey allowed Stewart to open up the offense, spreading the Broncos out and attacking cornerback Darrien Gordon.

That spread philosophy led to a beautiful 69-yard strike from Stewart to wide receiver Yancy Thigpen down the left sideline against Gordon, who was flagged on the play but abruptly let up, allowing Thigpen to run free.

Trailing 21-14, Stewart again turned to Thigpen down the left sideline against Gordon, this time hooking up on a 21-yard strike to tie the game and send it into halftime knotted at 21-all.

Throughout the game in ’97, Stewart showed great ball placement and touch all over the field, really driving the football down the field to guys like Thigpen, Courtney Hawkins, Charles Johnson and Will Blackwell.

By the way, Thigpen had a career game, hauling in 10 passes for 175 yards and three touchdowns against Denver.

Following a field goal by Jason Elam that gave Denver a 24-21 lead, Stewart and the Steelers took over, riding the legs of Stewart.

In fact, Gailey even busted out a read-option shovel pass to spark the Steelers on 4th and 6.

We’ve certainly seen that type of play with Ben Roethlisberger over the year, but this shovel to Hawkins was perfectly executed by Stewart, who held the ball just long enough while stretching it horizontally, drawing Hall of Fame safety Steve Atwater up the field, leading to a massive lane for Hawkins to move the ball into Denver territory.

Later, Stewart punched in a delayed quarterback draw from 4 yards out, giving Pittsburgh a 28-24 lead.

Then, with the game winding down and Pittsburgh needing to kill some clock, Cowher and Gailey turned to the artist formerly known as Slash to win the game.

The Steelers tried to run the same read-option shovel to the right side, but the Broncos crashed hard on Steelers running back George Jones, leading to wide open space for Stewart to jaunt through.

It’s quite fun seeing 10 open it up that way in the open field all those years ago.

Then, late in the game, Gailey stunningly called a quarterback sneak from the 9-yard line on 2nd and 4. Stewart caught the Broncos off guard and waltzed into the end zone.

Show Todd Haley this sneak! He might have an aneurysm.

Later, after capping off the win on the 9-yard sneak, Stewart received a bear hug from Cowher as the Steelers roared back from an early 21-7 deficit to the eventual Super Bowl champs to win 35-24 at home.