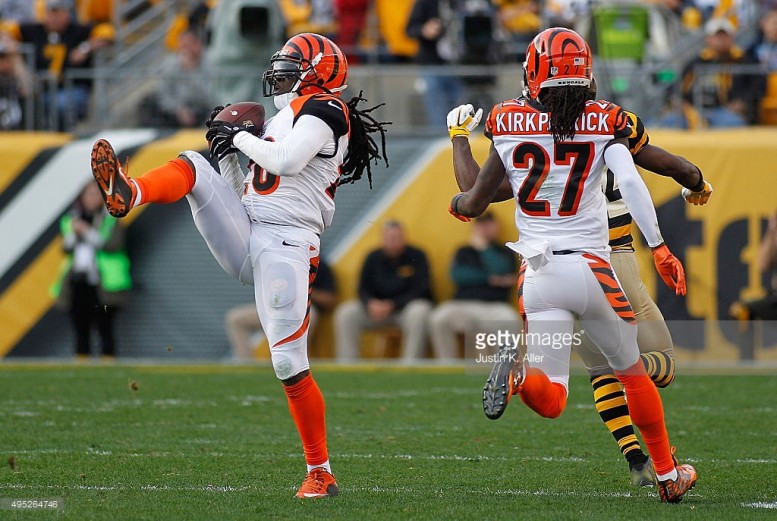 Over the past decade, there is no defensive back that has caused more problems for the Steelers’ offense than safety Reggie Nelson.

While Nelson has played for three teams over his career, suiting up for the Jacksonville Jaguars, Cincinnati Bengals and Oakland Raiders, it is his time in Cincinnati that most Steelers’ fans will remember. In twelve career games against the Steelers as a member of the Bengals, Nelson recorded six interceptions. In fact, no player over the last decade has intercepted the Steelers more often than the former Bengals’ safety.

Most Interceptions vs Steelers Since 2010

Nelson was particularly dominant over a stretch of games that spanned the early to mid 2010s. From December 23 2012 to December 13 2015, Nelson participated in seven games against the Steelers and record all six of his career interceptions against the black and gold franchise during this span. He also played a critical part in eliminating the Steelers from the 2014 postseason but more on that later.

The Steelers welcomed the Bengals to Heinz Field on December 23 2012. Fighting for a playoff spot, the Steelers needed to win in order to keep their playoff hopes alive. Unfortunately, the offense was colder than the December temperature and the team managed to only score 10 points, losing by a final score of 13-10. Nelson was able to put the dagger through the heart of the Heinz Field crowd as it was his late interception off Ben Roethlisberger that would seal the victory for the Bengals.

This would not be the last time that Nelson ruined a Roethlisberger performance for the Heinz Field crowd.

It is week eight of the 2015 season and the Steelers are at home, getting set to take on the undefeated Bengals. This game also sees the return of Roethlisberger, who has missed the last few weeks with a knee injury. With the return of their franchise quarterback, there is optimism that the Steelers can be the first team to hand the Bengals a loss this season.

It’s just too bad Reggie Nelson was about to spoil Roethlisberger’s homecoming.

After an opening drive touchdown orchestrated by Roethlisberger, the Steelers would be unable to find the rest of the endzone for the remainder of the game. Roethlisberger would go on to throw three interceptions with Nelson nabbing two of them.

Even when Nelson is not picking off deep passes from Roethlisberger, he has still found other ways to inflict harm on the Steelers. None more harmful than the hit he delivered on Le’Veon Bell in Week 17 of the 2014 season.

2014 will always be remembered for the emergence of the Killer Bs and for Bell’s breakout season. With an artillery of offensive firepower, the Steelers looked to make major noise through the postseason and their offense ran on the legs of their star running back.

If the Steelers’ postseason chances were a vehicle, then it would be fair to say that Bell’s legs were the wheels, driving the team to their goals. Unfortunately, that vehicle ran into Reggie Nelson who took out the Steelers’ wheels and sent the team in a disastrous collision with disappointment.

Nelson was the Bengals’ defender who delivered the hit to Bell’s knee in the 2014 season finale. Not only would this cost Bell the rest of the game but he would also be forced to miss the Wild Card matchup the following weekend. Without Bell’s services, the Steelers were one dimensional and were easily defeated by the Baltimore Ravens by a score of 30-17.

The former Bengals’ free safety will always be remembered for his hands and countless interceptions off Roethlisberger but it was his hitting ability that dealt the biggest blow to the Steelers’ franchise. Fortunately, Nelson has not suited up against the Steelers since 2015 and he spent the last three years of his career in Oakland. While he has not played since 2018, Nelson will forever live on as one of the Steelers’ biggest forms of kryptonite over the last decade.