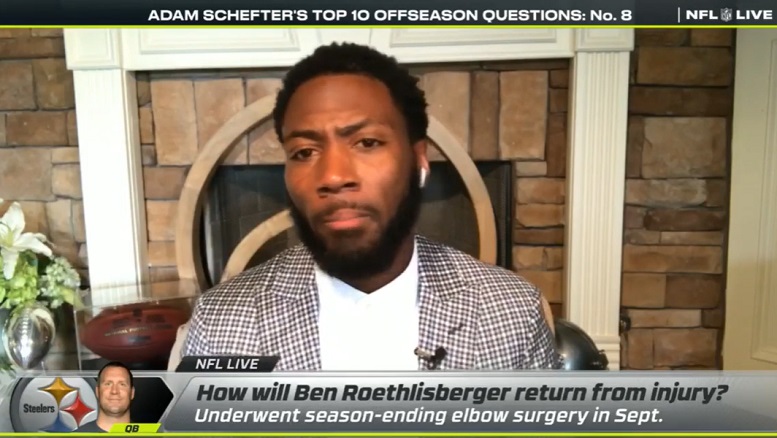 Can Pittsburgh Steelers quarterback Ben Roethlisberger return in 2020 after missing nearly all the 2019 season with a serous elbow injury and lead the team to their seventh Super Bowl championship before he retires? That was a question that several ESPN NFL analysts were asked on Tuesday during ‘NFL Live’ with one of them being the team’s former safety, Ryan Clark.

“You know, I look at Ben [Roethlisberger] and you look at this team, I sat with Coach [Mike] Tomlin in the offseason and he said something to me that both hurt my feelings and made me feel really good,” Clark said. “He said, ‘You know what?’ I almost have the same feeling walking into the stadium that I had when you played.’ And what he meant by that was he said, ‘The defense could carry us, we just can’t turn it over. We just can’t mess it up on offense.’

“And now you look at this offense if you add Ben Roethlisberger back, and the way that James Washington was able to play last year, [Diontae] Johnson on the outside, obviously JuJu Smith-Schuster healthy, and this team has everything it needs to win.”

Clark wasn’t finished with his response but when he continued he indicated that Steelers path to winning another Super Bowl includes a few obstacles that will be tough for Roethlisberger and the rest of the team to overcome even if the quarterback is fully recovered from his 2019 injury.

“The only problem is, there’s a guy in his own division named Lamar Jackson, who has the Baltimore Ravens and they’re stacked top to bottom,” Clark said. “Can they beat them? And then Patrick Mahomes is the quarterback in Kansas City, and I feel like if you started any 21 people with him, that team would have an opportunity to win.”

Clark was then essentially asked to confirm if his drawn-out response means that Roethlisberger and company won’t win another Super Bowl during his career.

That is one diplomatic response by Clark, but I get it. Look, the Steelers, at least on paper right now, seem more than capable of competing for a Super Bowl in 2020 and especially if Roethlisberger can return to form and stay there. Their defense should be more than good enough in 2020 and if the offense can complement by scoring a few more points than last season and not turn the football over as much, the team should win at least 10 games and maybe even as many as 13.

It’s very much agreed upon that the Steelers biggest obstacles in 2020, at least on the AFC side of the equation, will likely be the Kansas City Chiefs and the Baltimore Ravens, as Clark said on Tuesday

“So, it may not be that the Pittsburgh Steelers aren’t good enough to get to a Super Bowl, it may just be that the people that they have to face to get there are just slightly better,” Clark said.