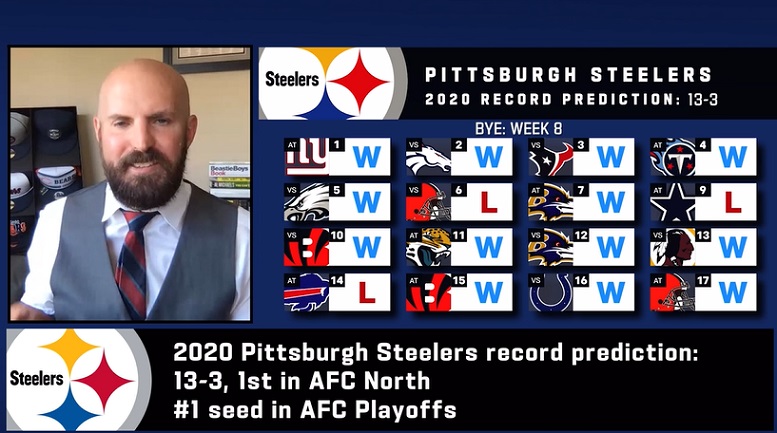 Do you have high expectations for the Pittsburgh Steelers in 2020? If you do, they’re probably not as high of expectations that Adam Rank of NFL.com has for the 2020 team.

In a recently released video, Rank predicted the Steelers 2020 regular season game-by-game which led to him having them only losing three times in total. After opening the 2020 regular season with five consecutive wins against the New York Giants, Denver Broncos, Houston Texans, Tennessee Titans and Philadelphia Eagles, Rank has the Steelers finally suffering their first of three losses on the season at home against the Cleveland Browns.

Rank theorizes that the Steelers will be looking too far ahead at their Week 7 road game against the Baltimore Ravens and that’s why they’ll lose to the Browns. Rank does have the Steelers beating the Ravens in Week 7, however, only to turn around and loose to the Dallas Cowboys on the road in Week 9 following their bye.

Sitting at 6-2 after a loss to the Cowboys, Rank then has the Steelers winning their next four games against the Cincinnati Bengals, Jacksonville Jaguars, Ravens, and Washington Redskins. It’s surprising that he has the Steelers sweeping the Ravens in 2020, which is a reverse of what happened in 2019.

Finally, Rank has the Steelers closing out the final quarter of their 2020 regular season 3-1 as he has them beating the Bengals, Indianapolis Colts and Brows and losing to the Buffalo Bills on the road in Week 14 for their third of three losses on the season.

Rank summed up his early expectations for the 2020 Steelers at the end of the video after predicting them going 13-3 on the regular season.

“So, the one reason I really love the Steelers this year, even though they scuffled last year to an 8-8 mark, they were fifth in total defense, they were first in sacks,” Rank said. “T.J. Watt Is becoming a defensive superstar, he’s going to surpass his brother at some point. They have the easiest schedule down the stretch. Their final eight games is deemed the easiest, based on last year’s record. So, don’t put too much stock in that, but still, they’ve got the easiest stretch of games.

“But the thing is, is that the Steelers were 30th in total offense last year. The only thing is, Ben Roethlisberger wasn’t playing. You had Devlin Hodges. You had Mason Rudolph. If Ben Roethlisberger comes back to be the quarterback that we think he’s going to be, and with some improvements on the offensive line, I know they brought in Weisnewski, that should help out immensely. This Steelers team should be dominant. Winning eight games with that quarterback combination last year should be viewed the same way as the Ravens winning 14. So, there’s no doubt in my mind that if the Steelers are healthy, if Ben Roethlisberger is healthy and ready to go, they are going to be 13-3, first in the AFC North, and the number one overall seed in the AFC.”

Seems a bit bullish to me on Rank’s part and especially when it comes to him having the Steelers sweep the Ravens in 2020. Even so, the Steelers should have a great defense once again in 2020 and the return of quarterback Ben Roethlisberger on offense should really solve a lot of the scoring problems the 2019 team had. Will I be surprised if the 2020 Steelers ultimately go 13-3? No, no I will not. I currently have the 2020 Steelers winning between 10 and 13 games, so I don’t really think Rank is way out of his mind with his early prediction.