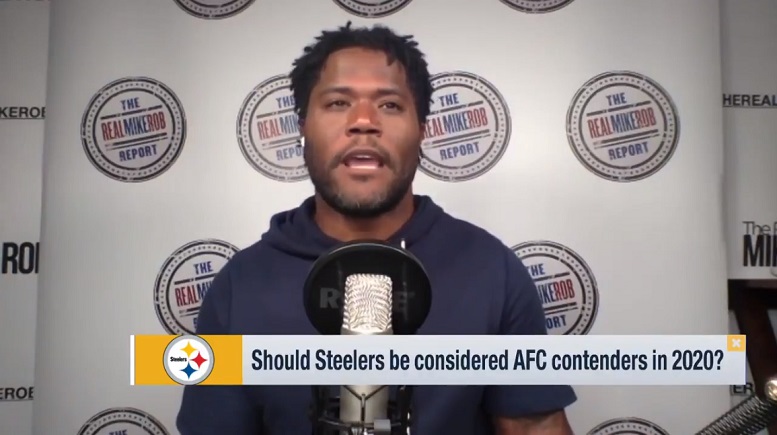 Should the Pittsburgh Steelers be considered contenders in the AFC in 2020? that was the question asked Monday morning on Good Morning Football on the NFL Network and of the four analysts that attempted to answer it, the reply given by former NFL player Michael Robinson was the most interesting as it included a shot at the leadership of Steelers quarterback Ben Roethlisberger, among other things.

Robinson first started off his with reply with somewhat of a compliment for Roethlisberger.

After talking about Roethlisberger’s past successful seasons effectively being a result of him just being a game manager, Robinson then went after the leadership abilities of the Steelers quarterback, or the lack thereof, in his opinion.

“And you heard James Conner talk about his leadership. And sometimes I questioned that with Ben Roethlisberger over the years because of the leadership was truly there, you may still have an Antonio Brown, your number one receiver still there,” Robinson said. “You may still have a Le’Veon Bell, one of the top running backs in the National Football League. You may have those guys still there. So, of course, the addition of Ben Roethlisberger makes this Pittsburgh Steelers team legit. And I thought Mike Tomlin did a great job getting his team to 8-8 last year, but at the end of the day, Ben Roethlisberger, he has to be better when he is healthy.”

That’s a lot to unpack there, but I’ll give it the old college try just the same.

Since those two Super Bowl championships, the Steelers haven’t had near the same kind of defense as they did during those runs and that has led to Roethlisberger needing to win more than just a few games with his arm. Oh, and since 2014, Roethlisberger has had seven 400-plus yard passing games and no other quarterback has more.

As for Robinson’s comments on Roethlisberger’s lack of leadership and specifically him using that as the reason why wide receiver Antonio Brown and running back Le’Veon Bell are both no longer in Pittsburgh, give me a break. I guess Brown currently remains out of football and has played just one NFL game since being traded by the Steelers because Roethlisberger is such a bad leader. Even if Brown had not exploded to close out the 2018 regular season, he would have done so well before now. It’s not a bit surprising that Brown remains out of football. As for Bell, I guess Robinson missed the part about Bell turning down contract offers from the Steelers and him choosing to not play under the franchise tag in 2018. Not sure how Roethlisberger gets blamed for Bell no longer being part of the Steelers. That’s just silly on Robinson’s part.

About the only thing that Robinson said Monday morning about Roethlisberger during his response that was somewhat on point was him saying that the Steelers quarterback needs to play better moving forward when healthy. The only reason that’s partially swallowable is because Roethlisberger threw 16 interceptions during the 2018 season with several of those being bad decisions on his part. Even so, Roethlisberger, and no thanks to the Steelers defense, still wound up throwing for a career high 5,129 yards, 452 completions and 34 touchdowns in 2018.

In totality, Robinson came off as an unprepared buffoon Monday morning when talking about Roethlisberger. It probably won’t be too much longer until the NFL Network parts ways with Robinson as he certainly seems to be mailing it in more and more as of late.

You can watch the full GMFB segment on the Steelers that includes all four analysts giving their thoughts below.

Should Steelers be considered AFC contenders in 2020? #Steelers pic.twitter.com/GVh9bFFdyB