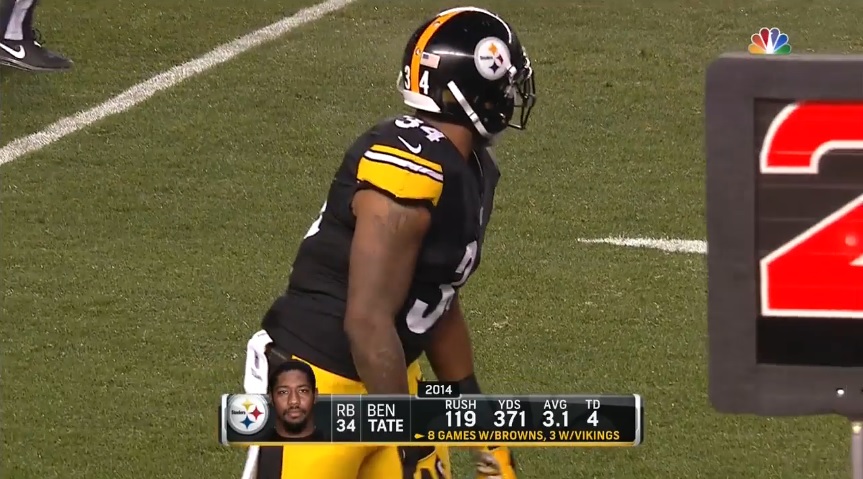 Oh Ben Tate. It’s not your fault. I mean, it kinda was but the Pittsburgh Steelers put him in an impossible spot. He was a last ditch effort to add to the Steelers’ backfield prior to the 2014 Wild Card Game against Baltimore. Le’Veon Bell was lost in Week 17 via this Reggie Nelson hit, one that led to a confrontation between him and Mike Tomlin after the game.

Pittsburgh’s depth was already on thin ice. LeGarrette Blount stormed his way out of town by mid-season. Of healthy and able bodies remaining, there was Josh Harris…and that was about it. So Pittsburgh immediately scooped up Tate. He began 2014 with the Cleveland Browns, twice facing the Steelers, including a 78 yard, two touchdown performance in the latter game. The Browns dumped him and he spent three weeks towards the end of the year with Minnesota.

Out of necessity, he suited up for the playoff game. He even earned the start, recording a two-yard carry on the first play of the game. Here he is wearing Rashard Mendenhall’s old #34 with his best run of the day, a seven yard pickup. Back when this team actually used pistol.

That was about the highlight of the run game that day. A depleted backfield coupled with the Ravens’ stingy defense, Tate had just five carries for 19 yards while Harris “led” the Steelers with 25 yards.

Tate also had two receptions. It would’ve been nice for him to have three. Down 23-15 in the fourth quarter, this scramble checkdown from Roethlisberger went through his hands and picked off by Terrell Suggs.

The Ravens scored on the next play, sealing the game. Pittsburgh’s offense became predictable and one-dimensional, falling to Baltimore 30-17 and ending their season.

That was the end of his NFL career. The only other football stop I’ve found is a brief stop in the 2017 Spring Football League. As far as I can tell, he never played in any of their organized games.

I haven’t been able to find much on Tate’s post-football days. He’s conducted the occasional interview, talking about his time at Auburn – where he rushed for over 3300 career yards – but that seems to be about it.

Ben Tate. Your blast from the past.