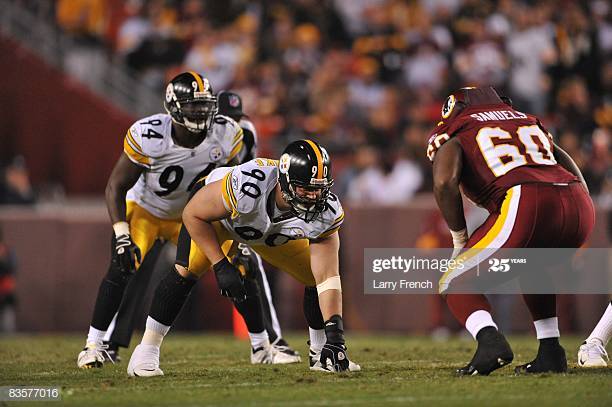 It wasn’t often the Steelers dipped their toes into the free agent market in those first few years under Kevin Colbert. They still don’t do it all *that* much these days. But count Kirschke in that group. Familiarity sure helped. A draft pick by the Detroit Lions, where Colbert served as the team’s Pro Scouting Director for the 90s, Kirsckhe signed with the Steelers in 2004. That came after Pittsburgh declined to match Rodney Bailey’s RFA offer sheet, sending him to New England. Kirschke became the long-term option. Here’s what Colbert said via the Post-Gazette. 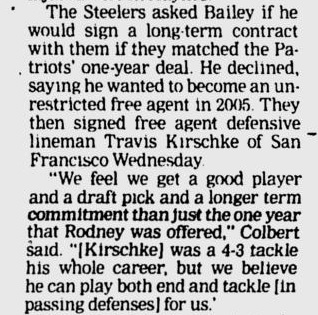 Not as a starter but quality depth behind the likes of Aaron Smith and Kimo Vol Oelhoffen. That’s basically what he was for most of his Steelers’ career, making just 18 starts in six seasons. All but one of those came over his final three seasons as Smith’s body began to break down.

But he served as quality, run-stuffing depth and was a role player for some really good defenses. He could chip in the occasional hurry too, notching nine sacks during his time in black and gold. Here’s a lock at his final one, cleaning up this pressure by LaMarr Woodley to sack Joe Flacco in 2009 (aka the Dennis Dixon started game).

His career was far from spectacular but he made it in the NFL, spending a whopping 12 years in the league. Not bad for a UDFA. In fact, of all undrafted players from 1997-2009, the length of his career, Kirschke has the 8th most games played (excluding specialists). Here’s the top 10.

And there’s something to be said for that kind of staying power. He was rewarded for that longevity too. Kirschke is the proud owner of two Super Bowl rings – 2005 and 2008. In his entire career, he recorded 294 tackles, 27 for a loss, and 13 sacks.

Though his career is long over, he’s still deeply associated with football. Kirschke has served as Valor Christian High School’s defensive line coach for the past ten years, molding potentially the next Travis Kirschke some day.

Travis Kirschke. Your blast from the past.