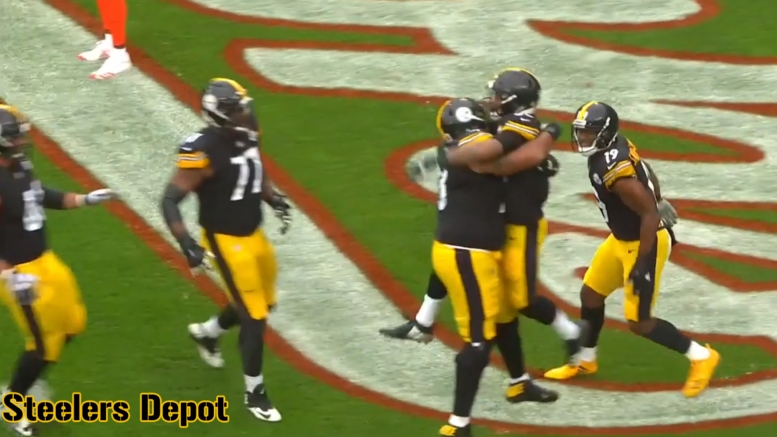 Every year has been a significant new chapter in James Conner’s story lately. Coming out of college, he was the local kid who beat cancer, the feelgood story. He was mostly an afterthought as a rookie behind Le’Veon Bell, an All-Pro player.

Suddenly, he was thrust into the spotlight by year two with Bell declining to report without the benefit of a long-term contract. Conner barely played as a rookie, and even ended the year with a knee injury that required surgery. Would he be ready for this moment?

There wasn’t a doubt in his mind, and for two reasons in particular. For one thing, entering the starting lineup in the NFL is nothing compared to the anxiety of facing a cancer battle, something that he dealt with before even going into the league. And on top of that, he had the overwhelming support of his family in the locker room.

That was something that he talked about yesterday when he popped onto Pat McAfee’s show to discuss a number of different topics. With his new book, Fear Is a Choice, now out, obviously his bout with cancer and his first couple of years in the NFL were discussed, and his host asked him about how he was prepared to step out of Bell’s shadow in 2018.

“That’s what the game of football does, it teaches you responsibility and how to be a leader and stuff like that”, he said. “I went through cancer at 21. And my teammates had my back through it all. They really rallied around me. It was like, man, he beat cancer, this is just a bonus, he gets to have fun, this is extra now. The hardest part is already behind me. So for me to go through the cancer and all that early on, it prepared me for life after, and definitely made me mature early”.

Now going into his fourth year, he is playing for a new contract, which he hopes will keep him in Pittsburgh, but he knows the business side of the equation as much as everybody. Even if he doesn’t end his career with the Steelers, though, he will always have the bonds that were forged here.

Those were really cemented during that 2018 season. “My teammates rallied around me, so it was easy to step into the spotlight and just ball”, he said. “I like to think I’m a good football player and I can ball, so I’m just gonna continue to do that”.

He did that at times, last season, but injuries had other ideas. His best game of the year was the same one in which he left with a shoulder injury that would plague him for the rest of the way, and he would never be close to 100 percent tin a playing capacity until this offseason.