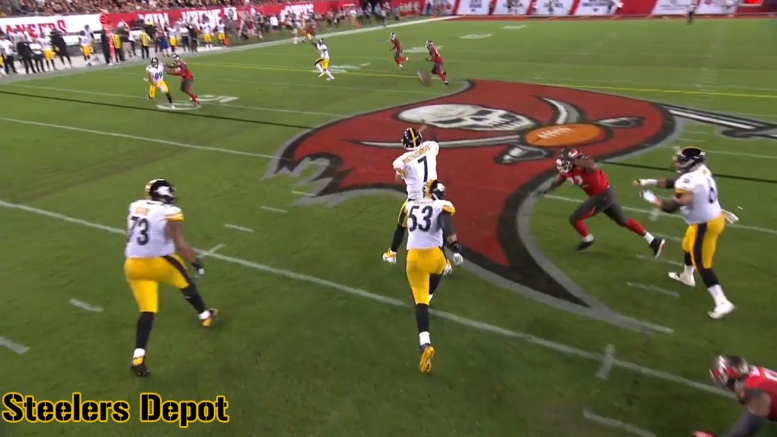 Last week, we visited a recent Pro Football Focus study that indicated the Pittsburgh Steelers passing game under Mason Rudolph last season was among the most conservative in the league, as least by virtue of the fact that he had the second-highest checkdown percentage in the league over the past two seasons.

In that same study, the site also took a look specifically at third-down situations. Under these circumstances, they found Ben Roethlisberger between 2018 and 2019 to be among the least conservative passers in the league with respect to settling for a checkdown.

According to their numbers, Roethlisberger attempted 183 passes on third down over the course of the 2018 and 2019 seasons. He only settled for a checkdown two times, which translates to a checkdown percentage of just 1.1 percent. Only Josh Allen of the Buffalo Bills was more aggressive, with just one checkdown on 245 third-down pass attempts.

PFF notes that this does not necessarily translate to better performance, singling out Patrick Mahomes as an exception, who was third with a checkdown rate of just 1.3 percent. They write that he had a third-down passing grade 20 percent higher than any other player in the top five in checkdown rate, and at least 10 points higher than anybody else in the top 10.

Still, this is nothing new for Roethlisberger. It usually takes Terrell Suggs literally in the process of wrestling him down to the ground before he settles for a conservative play that is not by design, preferring when an immediate option is not open to dodge rushers and look down the field to make a play.

It would be nice if the site had a more extensive database that actually shows these checkdown numbers and when they were used outside of articles such as these, as it’s the sort of statistic that is really their most valuable contribution to football analysis.

Be that as it may, this is the data that we have, and as stated, it’s not surprising. But with Roethlisberger coming back with a surgically repaired elbow, it does beg the question as to whether or not he will continue to play the same way.

Even if his elbow is supposed to be ‘good as new’, he may be more conscious of his physical health on the field. He may even be a bit gun-shy after having not played since September, which can happen to quarterbacks returning from injuries. Even Tom Brady admitted that after he tore his knee.