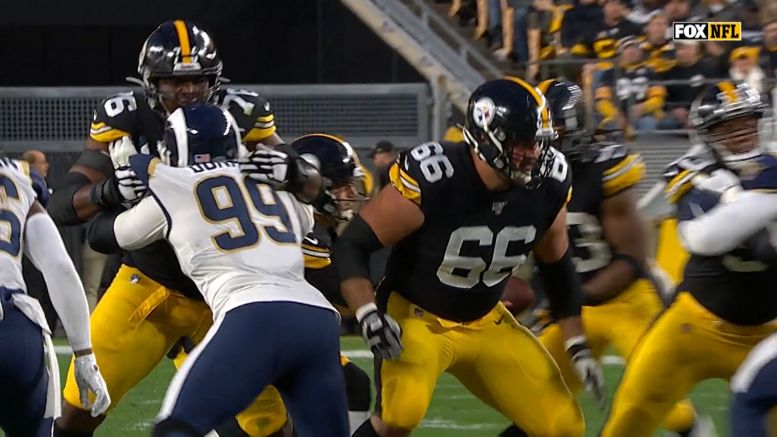 Reasoning: Status quo, with Ben Roethlisberger returning, but uncertainty at right tackle next to him.

David DeCastro hit 30 years old in January, just as the Steelers parted with a 30-plus guard in Ramon Foster with his retirement. Maurkice Pouncey and Alejandro Villanueva are also on the wrong side of 30, while Stefen Wisniewski would be a fourth in that age bracket if he wins a starting job later this year.

Of the four, DeCastro is clearly he one still playing at the highest level, and with Ben Roethlisberger returning this season, we should get a clearer picture of that than was available last year with the atrocious offensive display that we saw due to injuries at a number of positions.

At the same time, we don’t yet know what is going on at right tackle. Matt Feiler could kick inside to guard, in which case, it would mean that there will be a new starter next to DeCastro, either Chukuma Okorafor, who does have two starts there, or Zach Banner, who has played the tackle-eligible role but not tackle while in Pittsburgh.

The good news in that regard is that he is not unfamiliar to change next to him. Marcus Gilbert, prior to last season, was the man at the start of the season at right tackle for every year of DeCastro’s career, but frequent injuries caused other faces to line up there. There was Mike Adams, and Kelvin Beachum, and Chris Hubbard especially, before Feiler entered the starting lineup through the same mechanics.

But the Stanford guard isn’t getting any younger, and I think it’s fair to say that he has already hit his peak. The question is whether or not he is still within the boundaries of that peak, or if he is already past it.

DeCastro has two years left on his contract, including the 2020 season, which means that he will be due for an extension next year—if the Steelers want to give him one. By then, he will be 31 and signing a deal to pay him the age of 32 and beyond. That means this is a significant year for him as well, because it will determine how the front office wants to approach his contract status in 2021.