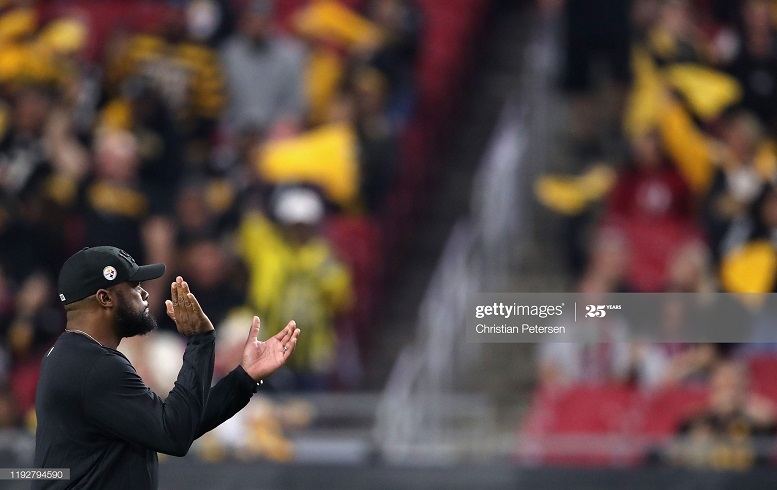 Assuming the 2020 NFL regular season is played, will fans be permitted to attend the games as part of the continued fallout associated with the ongoing coronavirus pandemic? It’s too hard to tell right now but we figure to get somewhat of an idea of how no fans, or limited fans in attendance, will impact professional events starting in the near future with the NHL, NBA and MLB set to resume their seasons in the next 30 days. On Monday, Pittsburgh Steelers head coach Mike Tomlin was asked during his interview with Kentucky basketball head coach John Calipari on his weekly show what his thoughts are right now on their possibly not being fans at sporting events for the foreseeable future.

“You know, I think the thing that I’m interested in is how it changes the game maybe mechanically in some ways,” Tomlin said. “Communication. The ability to hear communication, whether it’s player-to-player within a team or the opposing team. I think there’s going to be some interesting elements of the discussion if we end up in that area just in terms of the communication end and the information you’re able to gain and how you’re able to use it is going to be an interesting element of it.”

Tomlin didn’t stop there with the communication element of there not being fans present for sporting events as he also discussed how it could also affect from an emotional standpoint as well.

“Then there is obviously the emotional element of it of what fans provide us in terms of inspiration in those moments,” Tomlin told Calipari. “In our game, man, they’re so integrated into the moments. You know, you got third-down and goal on the three-yard line, man, in a significant moment, man, part of that moment is everybody on their feet and leaning in and the atmosphere that it creates, you know? So, that’s going to be interesting. I don’t have a sense of kind of what that’s going to feel like or how that’s going to change those moments, but I am spending a lot of time just talking about mechanically from a coach’s perspective.

Tomlin went on to provide examples of the mechanical aspect that he’s been discussing with his coaching staff.

“You know, if we’re making audibles offensively and the defense is capable of hearing those audibles, what does that mean?” Tomlin said. “Or, you know, you’re an offense and you’re in hostile environments, man, and oftentimes you can’t communicate. and in this environment, you might have an opportunity to so what does that provide you? It’s just a lot of communication discussions being had around the lines of fans or no fans, but I’m really interested in that emotional impact in those significant moments and seeing and feeling what that would be like.”

At least Tomlin is thinking about and having discussions about how no fans inside stadiums for games this season might wind up impacting the overall contest in several different ways. The Steelers figure to have a vert veteran team this year so that could potentially help in several different areas during the 2020 season and possibly even when it comes to no fans being present for games.

Personally, I don’t look forward to seeing what a Steelers game at Heinz Field without fans looks like but it’s a reality that could come to fruition if there’s a pandemic relapse of some kind in the coming weeks. Even a half empty Heinz Field would be tough to digest. Even so, it’s good to get Tomlin’s insight on the possible impact on teams by not having fans in attendance for games.