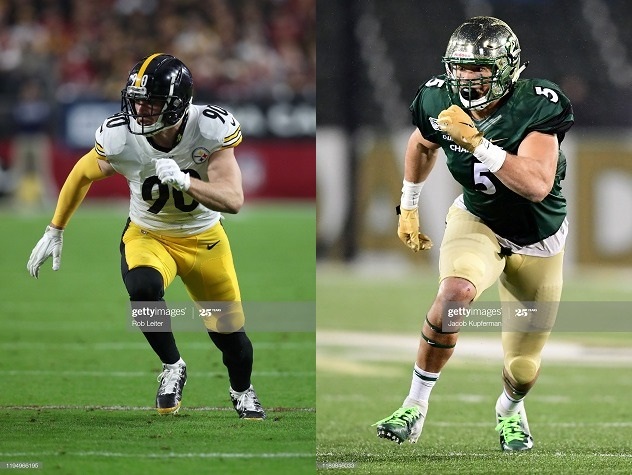 Thanks to the ongoing coronavirus pandemic, the normal NFL offseason program has been wiped out and replaced with a virtual one complete with Zoom conference calls and no on-the-field work. This change in the offseason program will make it hard for all NFL rookies around the league to get up to speed with their new teams. Pittsburgh Steelers outside linebacker T.J. Watt was a guest on SiriusXM NFL Radio on Tuesday and during his interview he talked some about how he’s personally dealing with the changed offseason program so far.

“It’s been going really well,” Watt said. “I think just like anything, it’s an adjustment period for a lot of us. Going up through the draft process, a lot of coaches always like to ask you, ‘How do you learn?’ Because they were always interested. We have so many people coming from different backgrounds that learn differently. And some people, this virtual period is an extra help to them. And to some people it’s not helpful at all.

“So, for me, I’m trying to do as much individual study on top of everything else that I can because I feel that’s the most effective way for me to be able to watch myself. Watch as many conference games from last year that I can and just be very critical of myself. And then try to watch as many future opponents as I can on top of course working out and pushing my body to the limit like I do every offseason.”

While the virtual offseason will likely be tough for the Steelers rookies, Watt hopes to make it a bit easier for one of the draft picks that plays the same position that he does, outside linebacker Alex Highsmith, the team’s third-round section this year out of Charlotte. Watt talked some on Tuesday about how he has attempted to communicate with Highsmith since he was drafted to help ease his transition into the NFL and more importantly, the Steelers.

“Yeah, I think a big beneficiary for me is, once Alex [Highsmith] was drafted, I kind of reached out to him and we’ve talked a lot on the side,” Watt said. “And I just told him from the start that if you have any questions, don’t feel like you’re bothering me at all. You can always reach out to me, whether it’s anything from a drill work to an actual alignment, or if it’s an assignment, he’s going to get the same playbook that I have and I’ve been doing it for three years now.”

Watt also has communicated to Highsmith that he’s willing to help him in other ways as well.

“But I told him, I know this is a weird time for a lot of people who don’t necessarily have all the proper equipment to do all of the necessary drills,” Watt said. “He doesn’t know every single drill that we do here in Pittsburgh, so I’m able to help him through that. Send him videos, he can send me videos. I just told him I’m here to help. I’m not here to undermine guys or say that I’m better than him and I’m not going to help him at all.”

Watt is obviously the quintessential teammate for Highsmith to have as a rookie and that’s not overly surprising. After all, Watt is likely going to be with the Steelers for many, many more years to come and thus the quicker he can help Highsmith reach his ceiling, the better it will be for the team as a whole.

“I’m here to help him as much as I possibly can because he’s going to help us win football games down the road,” Watt said of Highsmith.