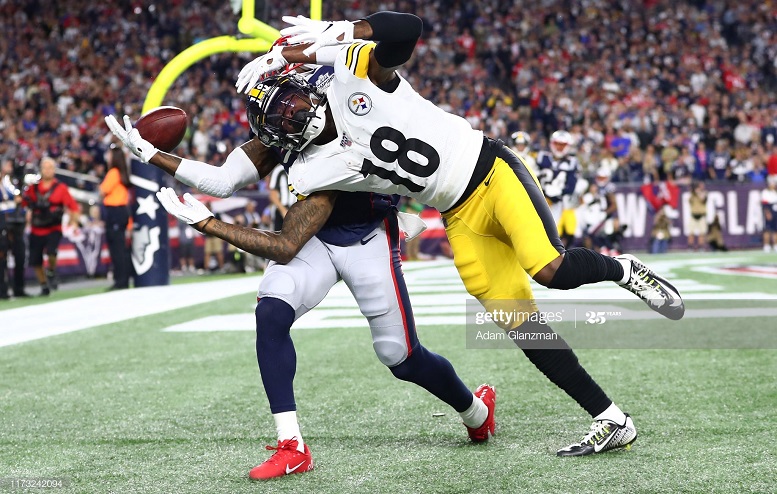 The Pittsburgh Steelers provided quarterback Ben Roethlisberger with two new receiving weapons this offseason with the signing of tight end Eric Ebron during the early stages of free agency and the selection of wide receiver Chase Claypool in the second-round of this year’s draft. On top of those two new Steelers players, one can probably lump in second-year wide receiver Diontae Johnson into the mix as a new receiving weapon for Roethlisberger in 2020 due to the limited amount of time both were on the field together in 2019 before the quarterback suffered his season-ending elbow injury. On Wednesday, Johnson talked about the prospects of playing a lot more with Roethlisberger in 2020.

“It’s crazy. It’s Big Ben,” said Johnson of Roethlisberger, according to Teresa Varley of steelers.com. “He’s great. Just being able to work out with him this offseason has been good. Just getting the timing down, get a feel for him, what he likes, what he doesn’t like. How he likes to throw the ball on a certain play, certain routes. Just trying to pick his brain. I might go back up there next week and work out with him again. Just getting that timing down and get a bond with each other so we can build that trust.”

Johnson getting his timing down with Roethlisberger this offseason will be harder than usual due to the coronavirus pandemic as it has wiped out all summer OTA practices. Even so, it’s good to hear that Johnson has already worked some with the rehabbing Roethlisberger this offseason with more sessions likely on the way. Johnson said Wednesday there’s been ongoing dialogue with Roethlisberger dating back to the end of his 2019 rookie season, which culminated with him catching 59 passes for 680 yards and a team-best five touchdowns.

“Me and Ben started talking during the end of last season,” Johnson said on Wednesday. “I had to prove to everybody I can play, that I am not a bust. As the season went on, I started contributing, making plays. He was talking to me more. It’s building that trust with one another. I talk to him almost every day now.

While Johnson impressively led all rookie wide receivers in receptions last season, expectations will be for him to far exceed his 2019 stat line. If both he and Roethlisberger remain healthy in 2020, that shouldn’t be too tough of a task. Last season, Johnson managed to catch three passes from Roethlisberger for 25 yards in the Steelers regular season opener against the New England Patriots. That’s not bad being as the team’s first of two third-round draft picks in 2019 played all of 24 offensive snaps in that Week 1 contest.

In the Steelers Week 2 game last season against the Seattle Seahawks, Johnson only logged two offensive plays with Roethlisberger on the field prior to the quarterback suffering his season-ending elbow injury late in the first half.

While Johnson was only on the field with Roethlisberger for 26 total plays last season, he feels like the sky’s the limit in 2020 for them both.

“That’s my guy,” Johnson said of Roethlisberger on Wednesday. “We’ve got things to do this year and we are trying to win the Super Bowl together.”