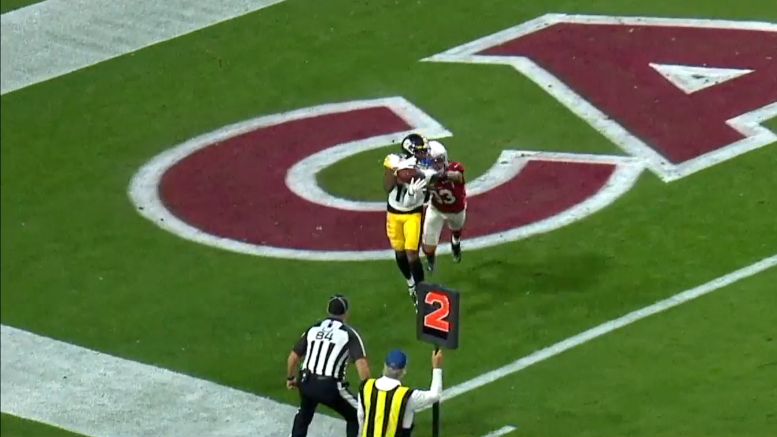 Pittsburgh Steelers wide receiver Diontae Johnson, the team’s first of two third-round selections in the 2019 NFL Draft, had a great rookie season that included him catching 59 passes for 680 yards and 5 touchdowns. Johnson’s 59 receptions in 2019 also led all rookies, a feat that not many would have predicted happening for the Toledo product and especially after starting quarterback Ben Roethlisberger suffered a season-ending elbow injury just six quarters into the schedule. On Wednesday, Johnson held a Zoom press conference with the local media and during it he revealed his goals for the 2020 season.

“The ultimate goal is to win a championship,” Johnson said on Wednesday, according to Teresa Varley steelers.com. “My goal is to have at least 1,000 yards and the Pro Bowl. I also want to be an All-Pro punt returner.”

Both of those individual goals Johnson has certainly are attainable and especially with a return to form of Roethlisberger, who managed to complete just three passes to the young wide receiver for 25 yards in the Week 1 regular season opener against the New England Patriots before suffering his season-ending elbow injury in Week 2.

“It’s crazy. It’s Big Ben,” said Johnson of Roethlisberger. “He’s great. Just being able to work out with him this offseason has been good. Just getting the timing down, get a feel for him, what he likes, what he doesn’t like. How he likes to throw the ball on a certain play, certain routes. Just trying to pick his brain. I might go back up there next week and work out with him again. Just getting that timing down and get a bond with each other so we can build that trust.”

2018 was the last season in which the Steelers had a player register 1,000 or more receiving yards as both Antonio Brown (1,297) and JuJu Smith-Schuster (1,426) both accomplished the feat. Only twelve different players have managed to register 1,000 or more receiving yards in a single season as a member of the Steelers throughout the history of the franchise so Johnson accomplishing the feat in 2020 would be notable.

As far as Johnson and his goal as a punt returner in 2020, this is really the first that we’ve heard this offseason that he might have that full-time job in 2020. Last season, fellow Steelers wide receiver Ryan Switzer was the team’s primary punt returner for the first half of the 2019 season as a back injury forced him to the Reserve/Injured list. Johnson then took over for Switzer as the team’s punt returner in Week 10 and finished the regular season with 20 returns for 248 yards and a touchdown. He made such a big impact in the punt return game during the second half of his rookie season that he ultimately earned a spot on the 2019 second-team Associated Press All-Pro team.

Last season, Johnson was named AFC Special Teams Player for Week 14 after his 85-yard punt return for a touchdown helped propel the Steelers to a 23-17 road win against the Arizona Cardinals. Johnson also chipped in 6 receptions for 60 yards and a 2-yard touchdown catch in that win against the Cardinals as well.