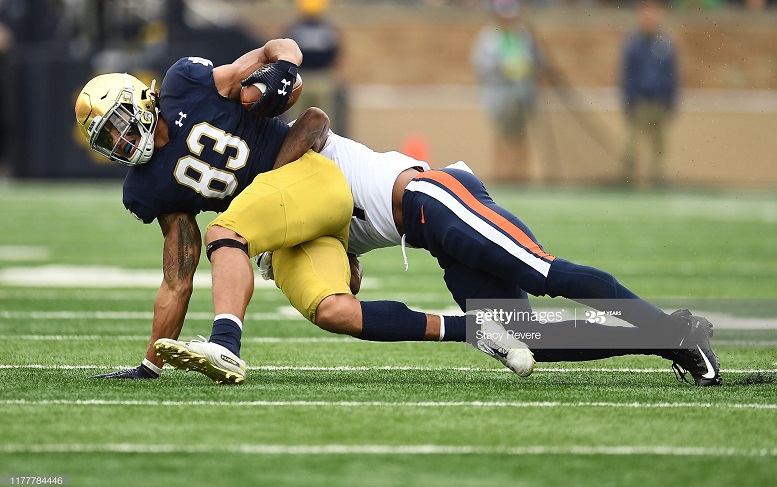 This series continues on with a complete contextualization of Claypool’s 2019 Notre Dame game against Virginia.

In total, Claypool was targeted nine times against Virginia and he unfortunately only caught six passes for 30 yards. On Claypool’s third catch of the game, a wide receiver screen to the right, he suffered a left ankle injury when tackled along the sideline. That injury would go on to hamper Claypool the remainder of the game. It was noticeable. On Claypool’s fourth target of the game against Virginia, a deep pass down the middle of the field, a nice read and leap by the deep safety prevented the wide receiver from making a down-the-field catch. On Claypool’s sixth target of the game, he fell before completing his out-breaking route. His ankle clearly bothered him on that play. On Claypool’s eighth target of the game, a deep pass down the left side, he was able to get himself into position to make the catch despite being held. The football actually ended up hitting Claypool in the hands, but he could not come down with it. I did not register that incompleted target as a drop because of how the defender played it. The penalty against Claypool resulted in a 10-yard gain for the Notre Dame offense. While Claypool’s average targeted distance against Virginia was 9.4 yards down the field, his average reception length was a mere 3.3 yards, a result of a few completed wide receiver screens.

For a second-consecutive game, there is not much to pass along on Claypool when it comes to his blocking. He spent most of his offensive snaps way on the outside and away from running game action when the Notre Dame offense used it. This isn’t a bad thing, just that Claypool wasn’t really asked to do much of anything as a run blocker.

If not for his early-game ankle injury, Claypool would’ve likely continued his special teams contributions as a gunner against Virginia. However, Notre Dame’s first punt of the game came after Claypool suffered his ankle injury and thus, I did not spot him in the television tape on the punt coverage unit all game.

Claypool’s fourth game of the 2019 season was very underwhelming and the main reason for that was likely because he suffered a left ankle sprain early in the contest. Hats off to Claypool, for playing through that injury, however, as it clearly bothered him throughout the game. He was used a lot in the screen game against Virginia and his longest reception was all of 7 yards, which came in the fourth quarter. The ankle injury prevented him from contributing on special teams as well. The only new thing we learned about Claypool in his game against Virginia is that he has toughness and fortitude and that’s not an awful revelation to come across. Outside of that, Claypool didn’t do too much against Virginia and this game is easily a forgettable one for him.