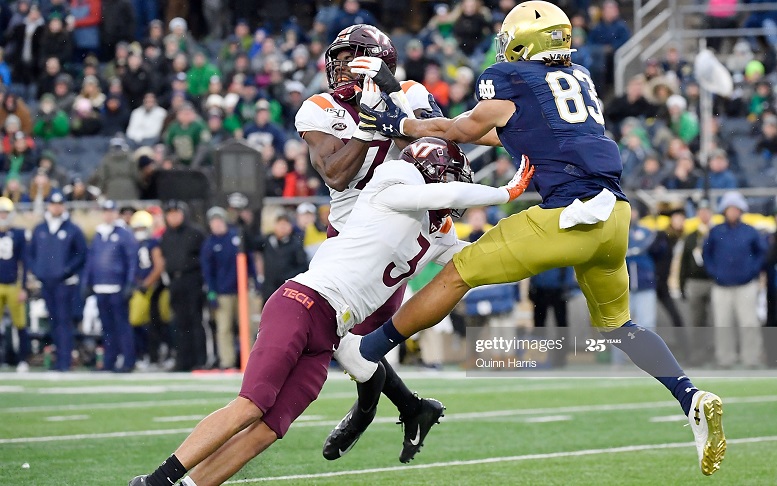 This series continues on with a complete contextualization of Claypool’s 2019 Notre Dame game against Virginia Tech.

In total, Claypool was targeted 18 times against Virginia Tech with two of those being wiped out as no plays because of penalties. I could have added two or three more targets as well but didn’t because they were passes thrown way out of bounds or off target on purpose with multiple Notre Dame players in the vicinity. Regardless of the number of targets you want to use for Claypool’s 2019 game against Virginia Tech, we were able to learn a little more about the Steelers new wide receiver in that contest. In total, Claypool registered 8 receptions for 108 yards against Virginia Tech with a long reception of 30 yards. That long reception came early in the game and via a wheel route, something we haven’t seen out of him in his previous 2019 games. In addition to a few more out routes and an underneath crosser, we also saw a few spot route catches in key moments. A few more contested catches were made by Claypool against Virginia Tech. However, we’ve now seen plenty of him getting one foot down on the sideline and not two. At the NFL level, one foot will not be good enough. It’s just a small criticism as he is still making those catches as the rules allow. One of the targets to Claypool in the fourth quarter was intercepted. On that play, however, Claypool had his defender stacked and beaten but unfortunately the pass couldn’t cut through the teeth of the wind and it subsequently hung too long and was intercepted well in front of the Notre Dame wide receiver right at the goal line. This play should have been an easy touchdown for Claypool, and it was good to see him win the vertical route without question. Claypool’s fourth quarter catch on a 4th and 10 with less than one-minute remaining in the contest effectively won the game for Notre Dame. It was a deep in-breaking route in the middle of the field. While Claypool had an easy drop in the fourth quarter, his other plays easily overshadowed it and made it forgettable. This was a great game for Claypool, and it was good to see it come right after his not so great game against Michigan. Make sure to watch all the linked to plays in the contextualization above.

Claypool had a few more blocking assignments against Virginia Tech and I trimmed up a few for all to see below. Once again, these blocking clips of Claypool at this point are gratuitous as all should have a full understanding of this phase of his game by now. The biggest mysticism of Claypool’s blocking as a whole is that not all the times does he stay on his effort long enough. That is it. He should be fine with the Steelers in this phase of the game with a little coaching.

Against Virginia Tech, Claypool once again played on the punt coverage team. Even so, there weren’t any of those punts from that game worth highlighting. Instead, I wanted to highlight the effort that Claypool gave during a long fumble return for a touchdown by Virginia Tech in this section. While Claypool did not catch the defensive player, he ran a long, long way attempting to. That sticks out on the tape from an effort standpoint and I wanted to make he received credit for it.

Claypool’s eighth game of the 2019 season was a nice bounce-back one for him as his previous effort against Michigan was not great. Claypool’s fourth down catch late in the game against Virginia Tech effectively won the contest for Notre Dame. He also made a few more contested catches against Virginia Tech, had a solid effort after another catch that showed how tough he is to bring down, and should have even had another long catch for a touchdown after beating his defender on a post down the middle of the field. Through eight games of the 2019 season, it’s clear that Claypool would have put up even better stats had he played with a better quarterback. Other than his fourth quarter drop, there’s not much to not like about Claypool’s showing against Virginia Tech.