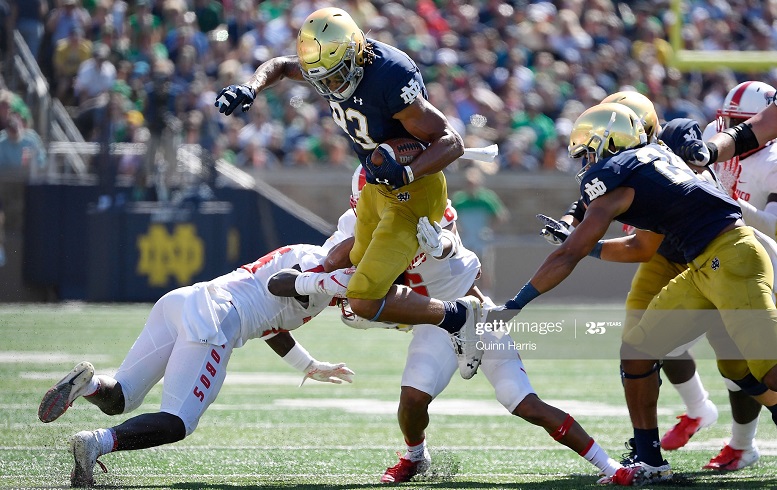 This series continues on with a complete contextualization of Claypool’s 2019 Notre Dame game against New Mexico.

In total Claypool was targeted nine times against New Mexico and he caught four of those passes for 96 yards. 28 of those receiving yards came after the catch. One other target against New Mexico, a deep pass to Claypool later in the second quarter, resulted in pass interference call on the defender and thus resulted in a 15-yard gain per the penalty. The four other incompleted passes to Claypool against New Mexico were uncatchable with one being a throwaway midway through the third quarter. Claypools two explosive plays against New Mexico couldn’t be any different. His first one happened on a screen pass to the right side and included him powering his way through a few defenders for a gain of 20-yards. His second big play happened on the very next play after the wide receiver screen and on that one he beat the cornerback easily on a post route after giving a slot nod to the outside. There was no deep safety in the middle of the field on this pass play and it made for an uncontested win/touchdown for Claypool, who registered an average reception distance of 17 yards in the game.

Claypool’s second game of 2019 was just as productive as his first and in several phases. Not only did he catch another four passes for 96 yards and a touchdown, he also drew a 15-yard penalty on a deep target and helped contribute on two other rushing touchdowns with blocks. Perhaps the only negative from the New Mexico game concerning Claypool was his inability to stack the defender deep down the left side of the field on his first target of the game. The ball was just to his outside as he was correcting his route a little back to the inside. It wasn’t a huge faux pas but just something noted in the broadcast during the replay of the incompletion. Claypool showed once again against New Mexico that he is tough to bring down after the catch. His special team effort throughout the game against New Mexico was great once again.