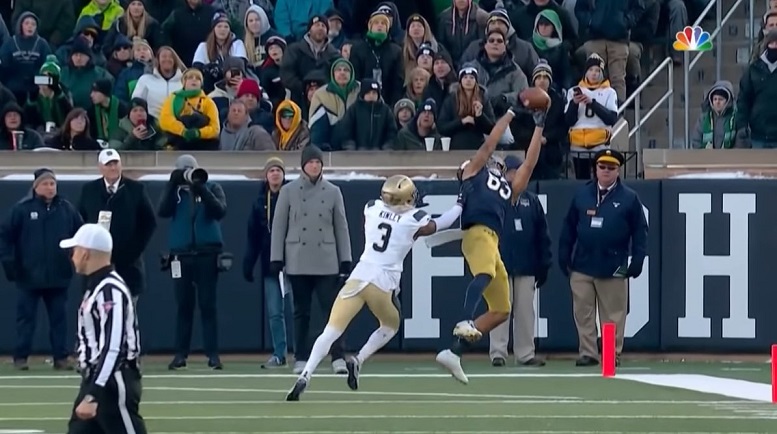 This series continues on with a complete contextualization of Claypool’s 2019 Notre Dame game against Navy.

Claypool was a very busy player for two and half quarters against Navy as the wide receiver was targeted nine times during that period of game time on his way to registering seven catches for 117 yards and four touchdowns. Claypool’s big day against Navy started early with a speed-out on the right side that resulted in a 23-yard gain after he broke the initial tackle attempt. His first of four touchdown receptions against Navy came via an underneath crosser off of a switch route concept. He was singled up on a safety, who never had a chance against him off the line. Claypool’s next reception of the game also resulted in a touchdown and it was a long one. He was singled-up on a linebacker down the seam with the two safeties split. It was an easy race for Claypool to win and all he had to do was secure the deep ball catch, which he obviously did. Claypool’s final two touchdown receptions against Navy once again included him showing his great ability to win back-shoulder fades and 50/50 balls. Both of these came in the end zone and his last of the two included Claypool showing magnificent body control, catch radius and concentration. Quite honestly, that fourth touchdown against Navy might have been Claypool’s signature highlight of his college career as not only did he win vertically off the line against man-coverage, he slightly separated with the football in the air and then made a tremendous effort in securing the catch. If there was any down moment in Claypool’s game against Navy, it was his early third quarter drop on an underneath crossing route. He obviously bounced back from that just a few players later with his great touchdown reception in the end zone.

There’s not much to pass along on Claypool concerning his run blocking against Navy and only one effort of his stuck out and below is that play.

Had Notre Dame needed Claypool on the punt coverage team against Navy, I’m sure he would have been part of that group. However, Notre Dame never had to punt in the first two and a half quarters against Navy so Claypool didn’t log any special teams snaps prior to being sat down for the remainder of the contest after scoring his fourth touchdown of the game.

Claypool’s tenth game of the 2019 season was spectacular and full of big contributions and several things we’ve seen out of the big wide receiver in his previous nine games. Claypool easily looked like the best player on the field against Navy, who didn’t help their own cause defensively by matching up a safety or a linebacker on the wide receiver. There’s really not much to add to this game summary outside of just noting that his third quarter drop was really the only small blemish on his play. Claypool is going to be a huge red zone weapon for the Steelers initially as he grows into a regular role in the offense. It will be hard for defenses to single him up on the outside close to the goal-line.