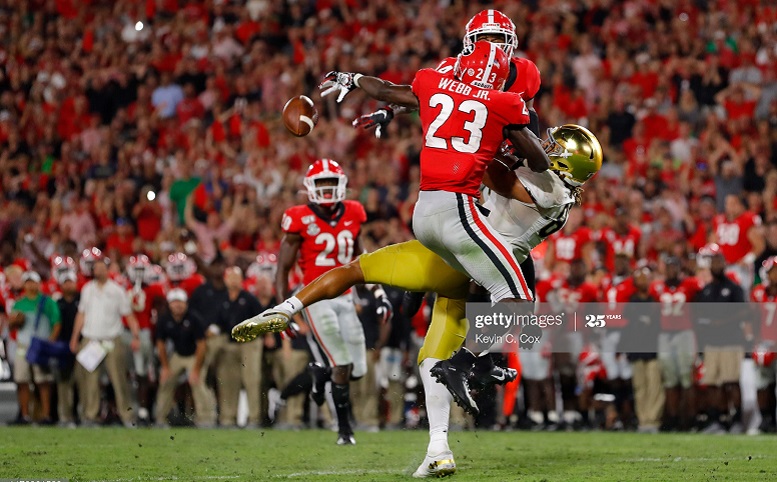 This series continues on with a complete contextualization of Claypool’s 2019 Notre Dame game against Georgia.

In total, Claypool was targeted 16 times against Georgia and unfortunately only caught six passes for 66 yards and a touchdown as his quarterback failed to get him catchable footballs most of the game. Claypool registered just one catch for 15 yards in the first half against Georgia and that came via an underneath crossing route against a poor zone defensive scheme. The Notre Dame wide receiver ran 17 yards after that easy catch. Claypool did draw a pass interference penalty in the end zone via a slot fade but couldn’t follow that up with a touchdown catch via a fade on the next play as he and the outside receiver collided and it threw the timing off. Claypool’s second half showing against Georgia included a nice acrobatic back shoulder catch deep inside the red zone that was good for 23 yards. The very next play was a quick spot right to the front corner of the end zone to the right and Claypool gained enough separation on the play for the catch and score. Other than a few out routes along the right sideline against off coverage in the second half, that was it for Claypool. The final three targets of the game that went in his direction included two throwaways and a jump ball Hail Mary that was more of a wounded duck with no chance of getting completed.

Claypool didn’t have any relevant blocking plays or efforts in the game against Georgia. They really didn’t ask him to do too much in the running game and the Notre Dame offense had all of 11 designed runs against Georgia. There is no video to show in this section because of that.

As usual, Claypool once again played quite extensively on the Notre Dame punt coverage team against Georgia and he was easy to spot on the unit. There are a few clips below that show how effective Claypool is at getting free as a gunner and down the field to put himself in position to make a play. In the second of these two clips, Claypool recovers a fumble after a muff by a Georgia player who had signaled for a fair catch with Claypool bearing down on him. Notre Dame turned that turnover into a touchdown several plays later.

Claypool’s third game of 2019 wasn’t as good as his first two but did include him making a few plays on offense and one on special teams. His back shoulder catch in the second half came on a 2nd and 19 play and it was clutch and at a crucial time. He followed that catch up with a short touchdown reception on the next play. His fumble recovery earlier in the game also led to one of Notre Dame’s two touchdowns in the game. The Notre Dame quarterback play against Georgia wasn’t great and that played a part in the team’s loss. Claypool probably could’ve contributed a few more catches with a few better throws, but that’s about it.