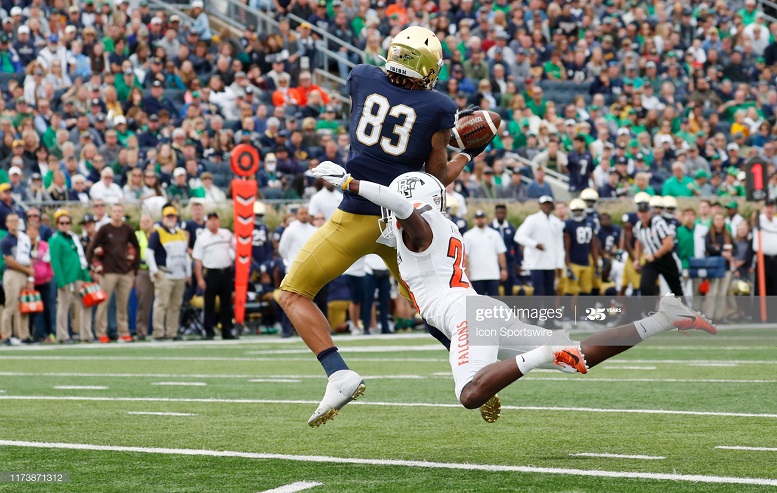 This series continues on with a complete contextualization of Claypool’s 2019 Notre Dame game against Bowling Green.

In total, Claypool was targeted four times against Bowling Green with all four coming in the first half. He caught three of those targets for 61 yards and two touchdowns. Two of those completions came via underneath crossing routes with him being wide open. One of those was courtesy of a rub route against man coverage. Claypool’s other reception, a 34-yard touchdown completion later in the first quarter, came on a post route with no safety in the middle of the field to help. It was a very easy pitch and catch for a score. Claypool’s lone incompleted target came on a 3rd and 6 in the second quarter on an extended play. On that incpmpleted pass, it’s possible that Claypool dropped it but the television angle makes it very tough to tell. There was a defender right on his back, however, as he was coming back toward the quarterback. Claypool’s average targeted distance against Bowling Green was 13.3 yards down the field and his average reception length was 12.3 yards. The long TD reception was the huge determining factor in that stat against Bowling Green with there being just four total targets. With Notre Dame blowing out Bowling Green in the first half, Claypool was rested in the second half.

Claypool had a few blocking assignments against Bowling Green but both of them weren’t overly exciting. On te first one, which came during as first quarter run, Claypool allowed the Bowling Green cornerback to slip past him to the inside to get in on the sideline tackle. The second blocking effort by Claypool against Bowling Green came later in the second quarter and during a jet sweep to the left side. Claypool, who was lined up in the slot on the left side on that play, needed to crack-back inside on a linebacker. He had a poor angle on the linebacker as the defensive player committed low in the box and instead of blocking the player in the back and risking an injury, Claypool just barely hooked his opponent and the player went to the ground quite easily.

The left ankle injury that Claypool suffered the prior week in Notre Dame’s game against Virginia more than likely led to the wide receiver not playing on special teams against Bowling Green. He was not needed just the same.

Claypool’s fifth game of the 2019 season included him scoring twice on three receptions against a very bad team in Bowling Green. Two of Claypool’s three receptions came via left-to-right underneath crossing routes in which he was wide open. Claypool only had two meaningful blocking efforts against Bowling Green and zero special teams snaps as far as I could tell. Thanks to Notre Dame blowing out Bowling Green in the first, Claypool was held out for the second half and that was probably smart with him still nursing a sore left ankle.