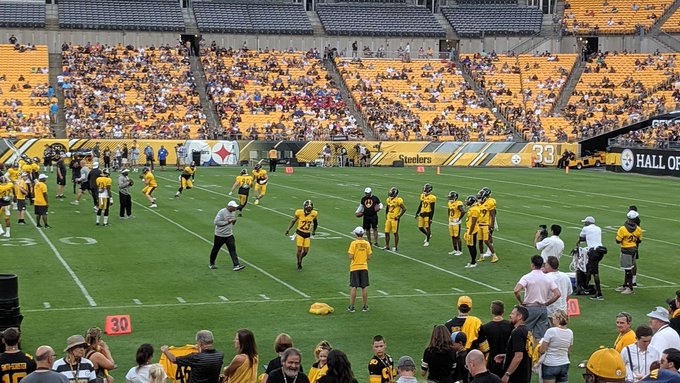 Even for the teams with the strongest rosters in the league, it’s hard to come out of a draft in which you have limited picks feeling as though you were successfully able to address all of your needs, or wants. This year, the Pittsburgh Steelers took some serious hits to their depth, only brought in four new players, and had just six draft picks to work with.

Much of the conversation surrounding their draft class since then has been about what needs are remaining on their roster. Nose tackle, inside linebacker, and safety are the positions that come up most often, at least by Steelers fans, and then the national media is all over the quarterback position.

General manager Kevin Colbert was asked about the draft and whether he might look to free agency to fill any more holes on the roster as he appeared on WDVE yesterday. Essentially, he said they won’t know until they get on the field.

“As we stand right now, every time we come out of a draft—you only have so many picks, you can only take so many players—how they fit, where they fit, we’ll have a better idea of what that all is as we get through training camp”, he said.

“Last year when we came out of training camp, we weren’t comfortable with our tight end depth, or our safety depth”, he added, “and we made a trade for Nick Vannett, who filled that second tight end role for us nicely, and of course the Minkah trade was something we could never forecast coming out of training camp, but when it was available, that obviously helped”.

That would be Minkah Fitzpatrick, of course, whom they traded their first-round pick for, and luckily for them he turned into a first-team All-Pro starting free safety with seven takeaways and two defensive touchdowns on the season.

“We’ll continue to evaluate who we have, how they fit, and whether we’re good enough or not as we move into the season”, Colbert concluded. “Veteran free agents are always an option. You have to make those decisions based on cap availability, cap space, cap maneuvering, which we always try to be prudent and safe with as we try to move into the season”.

As it stands, the Steelers have about $5.7 million in salary cap space right now, and that doesn’t factor in the new draft picks, the 52nd and 53rd roster spots, the 12-man practice squad, and a requisite in-season cushion of several million.

In other words, they really don’t have any money to spend on free agents who would command much more than the minimum salary, because they’re not far from where they would like to be during the year as it already stands, minus predictable future expenses.