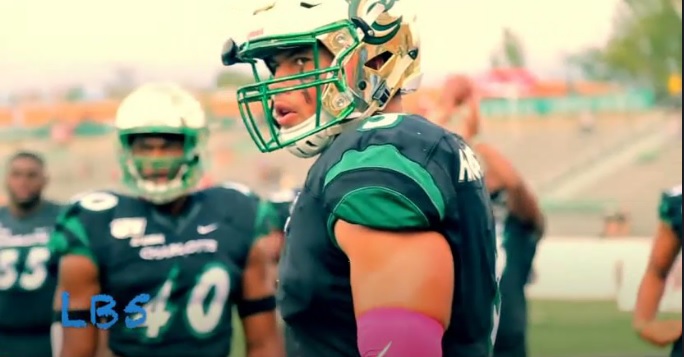 There were hints before the draft about the EDGE position being something they would address early and with their second pick the Steelers bring in a small school pass rusher. Behind starters T.J. Watt and Bud Dupree they have unproven depth with Ola Adeniyi and Tuzar Skipper so adding another player was prudent move.

The former walk on put up impressive numbers with 46 tackles for a loss and 20 sacks in his career including 15 sacks in 2019. The Steelers had contact with him prior to the draft which showed their interest. At the Combine he was one of only eight defensive lineman to register a 10 yard split under 1.70 seconds , had the a 33 inch vertical and was tops in his group in the short shuttle(4.31).

After facing off against his team Clemson head coach Dabo Swinney had some positives to say about Highsmith including, “He’s on all the ‘great player’ lists. I kept watching him and going, ‘Holy cow.’ He looks like Xavier Thomas. He’s physical, fast, disruptive. He’s causing sacks and tips. Really, really good football player. That No. 5 could play for anybody in the country.”

As far as where Highsmith was drafted it seemed a bit early based on where the experts saw his value.

The NFL Network’s Daniel Jeremiah did not have him listed on his Top 150.

Gil Brandt also did not have him listed in his hot 150.

Lance Zieirlein of NFL.com gave him a 5.99 grade (6.00 Developmental traits-based prospect) and had this to say, “Stand-up edge rusher with splashy production to get him noticed by 3-4 fronts. Highsmith is quick to diagnose and slip blocks to make plays in the backfield, but lacks the strength and anchor to take on blocks and set strong edges. He’s clearly put in work when it comes to creating a diverse inside/outside rush attack that has a chance to keep growing if he can weaponize his hands and improve his speed-to-power attack. His play is more finesse than physical and may not be ready for early downs in the NFL. He currently projects as an NFL backup but his ascending play and production could push him into a bigger role if he can get bigger and stronger.”

Our Josh Carney described him as having a rocked up frame that is an instinctive run defender and a good pass rush plan.  He gave him and early day 3 grade and concluded, “Overall, I really like the overall body of work and traits Highsmith has to work with. He has the right height and weight, good power, and the right mentality to thrive on the edge. I am a bit concerned with his short arms and the amount of production he had against small schools, but he’s definitely worth a flier early on Day 3, and good develop into a solid rotational pass rusher.”

Overall: This is a solid value pick for the Steelers. There were some other bigger names available including Bradlee Anae and Curtis Weaver but it’s clear now Highsmith must have impressed the Steelers during their interactions.

The value grade could’ve been higher but it’s a bit disconcerting he wasn’t on the top 150 lists but Zierlein did give him a positive review. Carney however had where he was going to be drafted pretty much pegged and Alex Kozora nearly had him at pick 102 in his final mock.  It fills a need to provide depth at the position but choosing a small school player in a year like this does have some risk.