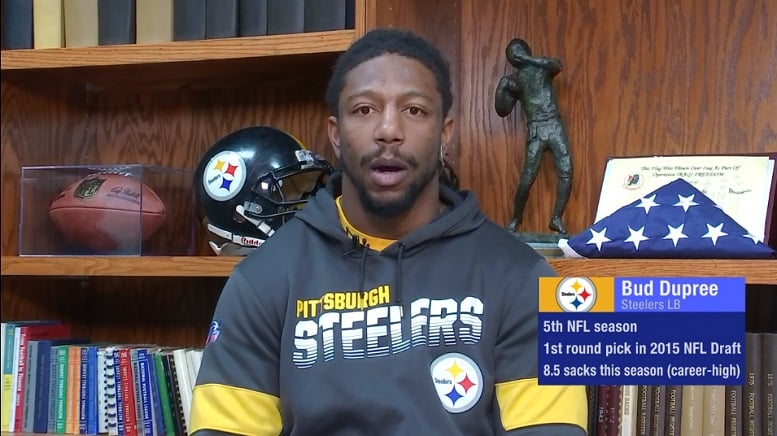 Topic Statement: The Steelers will work out a long-term extension with Bud Dupree by July’s deadline.

Explanation: For the 10,000th time, the Steelers reaffirmed that they have every intention of signing sixth-year outside linebacker Bud Dupree to a long-term extension. Just before the draft, he committed to the 2020 season by signing his franchise tag, but the two sides have until July 15th to work out a multi-year deal.

Dupree already has a cap hit of around $16 million by virtue of the franchise tag amount, so that’s not really going to be an issue, fitting a new contract under the Steelers’ 2020 salary cap parameters. At that total, there is really no reason they wouldn’t be able to lower the 2020 cap hit for him, in fact.

Pittsburgh appears to legitimately be of the belief that the 2019 Bud Dupree is the real Dupree, the player that they will be getting over the course of the next few years as he plays through his prime years. and if they can keep getting that out of him, they’ll sign up for it.

The team has made it pretty clear that they want to keep Dupree and T.J. Watt together as a pair that has worked well together, increasingly so, over the past three years. I also think Dupree wants to stay in Pittsburgh and will sign a fair-market offer.

The Steelers have never given a player the franchise tag without the intention of doing a long-term deal. Often enough, however, and not just with Le’Veon Bell, they’ve failed to reach an agreement. One of the sticking points is often their contract structuring. How Dupree feels about that, who knows, but it’s likely he’d like a big fat signing bonus like everyone else.

The team knows that contracts for Watt, Minkah Fitzpatrick, and others are right around the corner. Even Cameron Heyward is not on the books for 2021 yet. They have a lot of future commitments that are not even yet accounted for. The selection of Alex Highsmith was the first step in addressing post-Dupree realities in 2021.